Spring is here and March is over, so it’s time for another book reading report.

I was able to read ten different books to my son (some multiple times):

I was able to find each of the books fairly easily on the Internet except for that last one. Searching Google for the ISBN 9781435133358 gave me one result. It looks as if the result is from a library search engine called WorldCat, however, it lists the name of the books as A box full of puppies (including the improper case) even though the book I have doesn’t have the word “full” in it: 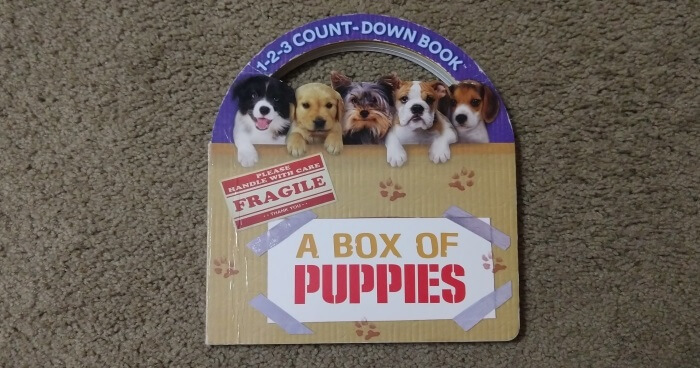 I don’t know if the book we have is some rare gem or not. It’s certainly odd I can’t find much about it online.

Oh, and reading to him continues to be a challenge. The best time to read to him is after we feed him dinner (or while) and he’s still strapped into his high chair. Otherwise, he’s very wiggly. He just wants to get down and explore!

I found this comic of a parent reading, although it looks as if it’s the parent reading to themselves rather than the child. The behavior is still similar:

I’ve decided, at least for now, to alternate between fiction and non-fiction books. I finished February with a fiction book (Cyberstorm) so the next book I chose was non-fiction.

How Children Succeed wasn’t the parenting book I expected, but it still provided insight on what children go through growing up. It mostly focused on the difficulties low-income household go through in raising children.

If we really want [children] to succeed, we need to first let [them] fail. Or more precisely, we need to help [them] learn to manage failure.
- How Children Succeed: Grit, Curiosity, and the Hidden Power of Character by Paul Tough https://t.co/M7YJHYPeWx

Star Wars: Darth Vader Vol. 1 is a comic / graphic novel. I intended to read it on my phone, since my Kindle doesn’t have color and can’t display comics, but it refused to download the book in its entirety. I ended up finishing it on my computer, but that was rather annoying, and I probably won’t read another Kindle comic because of this for a while.

I read these two books via Amazon’s Prime Reading program. It’s a benefit to all Amazon Prime members that allows you to read a number of books for free (well, other than the cost of Prime of course!)

I tried to see if the Amazon Associate site had a banner that I could display for Prime Reading, but they one have a regular Prime banner:

That’s it for March. What are you reading right now? Comment below!