My Ongoing War With Ground Ivy

Ground ivy is this smelly (at least according to my wife), annoying, invasive yard weed that has creeping stems that sprawl over and under the lawn, crowding out the grass a lawn is supposed to have.

I don’t care much about what kind of plants grow in our lawn, but my wife does. And she absolutely hates this plant which she calls stinkweed.

I thought I could just go outside in rip it out of the lawn, but there was just so much of it.

This was going to be war.

Preparing for the War

First thing I needed to do is figure out exactly what this stuff was. Unfortunately, it is not called stinkweed - that’s just what my wife calls it. I could tell it was ivy or ivy-like due to the interconnected vines. 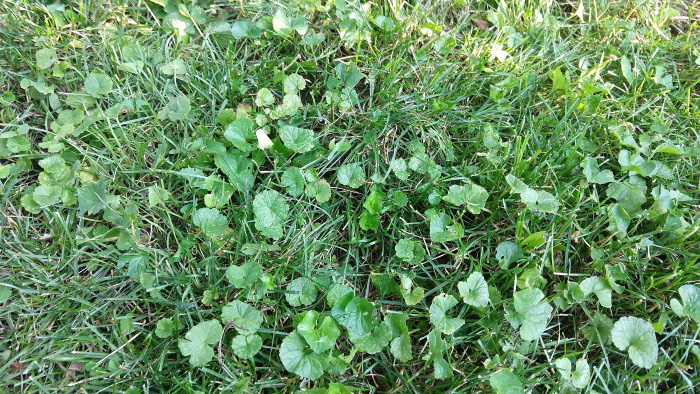 The weeds in the grass.

Fun fact: Glechoma hederacea is not the same as what is regarded as ivy, which usually refers to any plant species in the genus Hedera.

In addition to its scientific name, ground ivy is known as:

Once I knew what I was dealing with, I searched for how to deal with ground ivy. 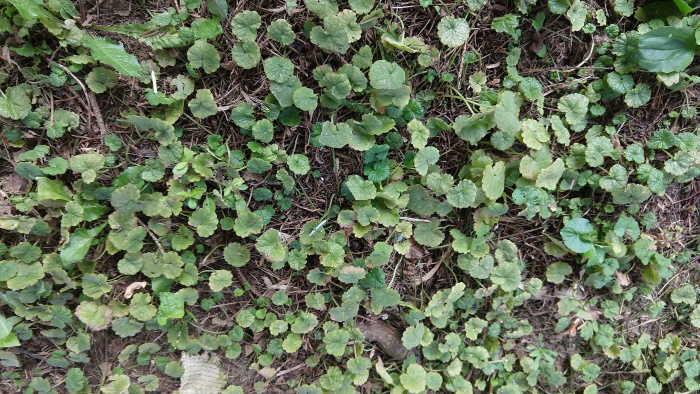 The Types of War

There were two types of war I was going to wage to deal with the ground ivy - conventional warfare and chemical warfare.

The conventional warfare simply involved ripping out the ground ivy. Except I wasn’t going rip the weeds out with my hands while on my hands and knees. Instead, I got a special type of rake - a thatching rake.

The main purpose of a thatching rake is to remove thatch. Thatch is just all the crap that builds around the base of the grass. 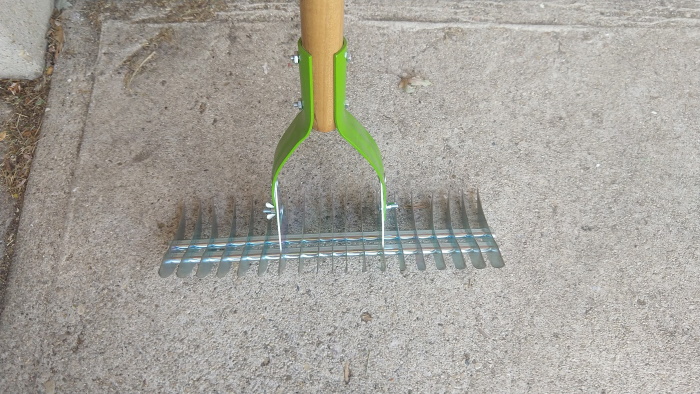 The end of my thatching rake.

Since the ground ivy is interconnected via vines, the thatching rake was excellent at grabbing the ivy and pulling it up en masse. It worked better where there was less grass - sometimes the vines of the ground ivy grow underneath the grass and underground.

The chemical warfare involved selective herbicide. I wanted to spray something on the lawn that would kill (or at least make it easier to remove) the ground ivy while leaving the rest of the lawn unharmed.

I chose Bayer Advanced All-in-One Lawn Weed & Crabgrass Killer because it specifically mentioned ground ivy on its label. The active ingredient is dimethylamine salt so anything with that would probably work. 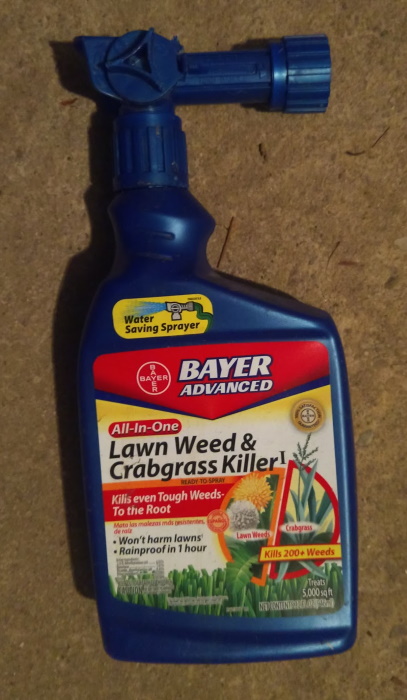 I didn’t want any unintentional casualties with this bit of chemical warfare. We have two dogs - Princess and Niko - in addition to our son.

While we could easily not let our son in the backyard while it was not safe, this wasn’t an option for our dogs. The backyard is their bathroom! So I bought one of those orange construction fences along with four or five green steel fence posts and did half of the yard at a time. 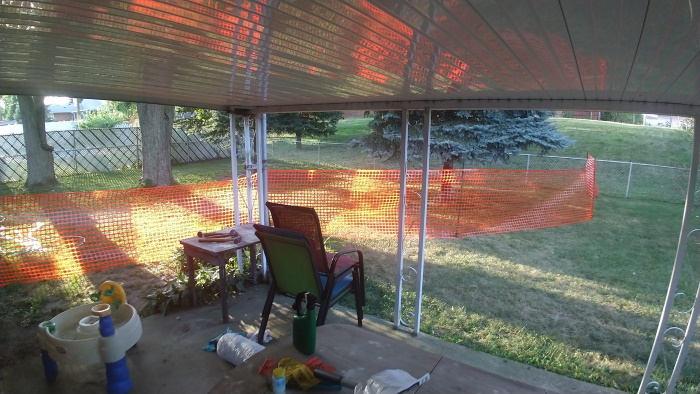 The orange temporary fence, dividing my backyard in half.

The chemicals worked. Within a week, the ground ivy looked was looking not so great: 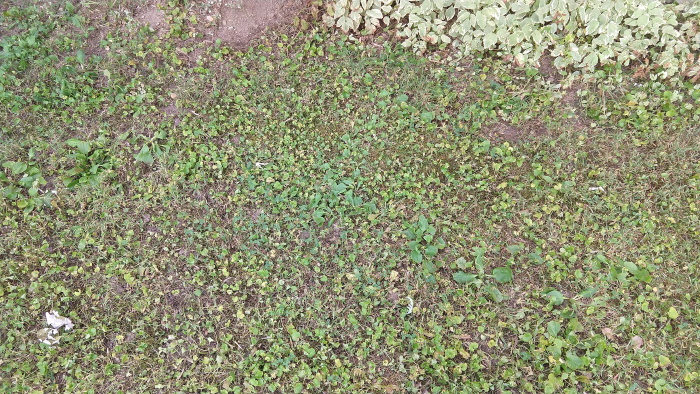 The dying ivy far away. 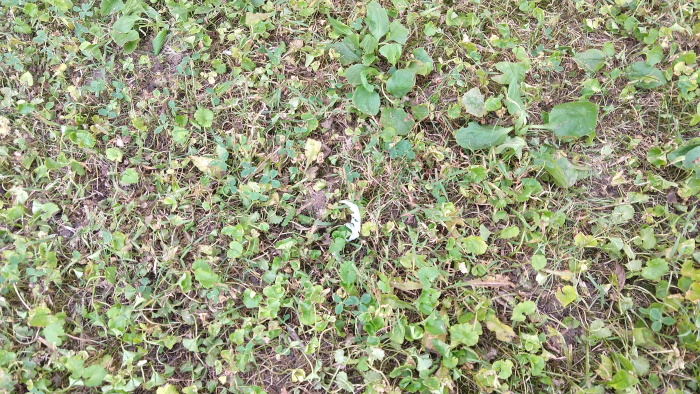 The dying ivy up close.

The fact that the weather has been dry has helped as well - ground ivy prefers damp areas.

After two assaults of chemical warfare (half of the yard at a time) and multiple assaults of conventional warfare, I think I am winning this war.

There are now large patches of the yard that have no plant cover - grass, ground ivy, or any other - and are just bare: 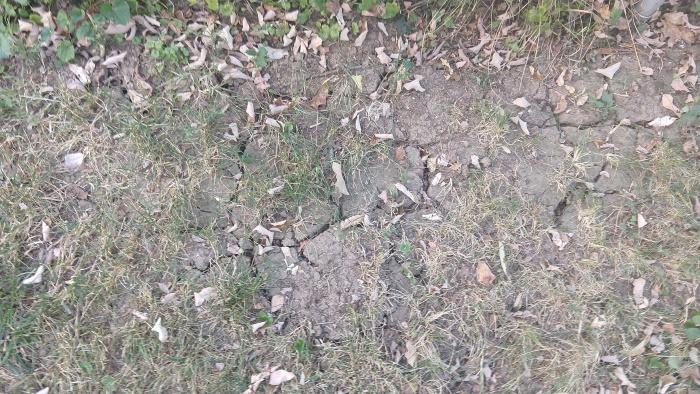 I’m going to have to get me some grass seed and plant it this fall. Hopefully, the grass will grow and take over before the ground ivy has a chance to come back. Nevertheless, I plan on spraying some more of the selective herbicide come spring.

To recap, I needed to get rid of a lawn weed known as ground ivy. I used a thatching rake and a selective herbicide to help eliminate said ground ivy.

It seems to be working, but there are battles ahead, and the war is not yet over.

3 comments for My Ongoing War With Ground Ivy