If you’ve been to this blog before, you’ll notice that I changed the name from Joe’s GitHub Blog to JoeHx Blog. I also changed the tagline from Personal Finance, Programming, Politics, and Other Ponderings to Writing What I Want.

I’m currently undergoing a slight rebrand of the site.

The main reason is that I needed to remove the word GitHub from the name.

This blog is not affiliated with GitHub. I merely serve this blog via GitHub Pages.

So it is a GitHub blog. Which made sense when I first created the blog. However, I don’t want to get in any legal trouble with Microsoft. (Microsoft bought GitHub back in 2018).

I’ve not received any cease-and-desist correspondence from Microsoft, although I think it would be cool if I did. I’m just doing this proactively.

“Joe” is a pretty generic name. There’s probably a “Joe’s Blog” out there already, and I need to differentiate myself somehow.

Some time ago I started referring to myself as JoeHx on blog comments instead of simply Joe. Not sure how long ago, but the oldest comment I could find was on someones blog post from June 26, 2014.

So I could’ve renamed the blog JoeHx’s Blog except how do you pronounce that? That’s the issue with making nouns possessive that end with “s” or an “s” sound.

So, JoeHx’s Blog would just be friggin awkward like using “he and/or she” instead of just one or the other (hint: use the singular they or make the object plural to begin with).

Just look at all these articles on making -s nouns possessive:

Blog of JoeHx sounds awkward, too. Plus, using “of” to show possession is supposed to be used for inanimate objects. Think “the engine of the car” versus “the car’s engine.”

So screw it, I thought. Just throw my name and the word blog together. No possessive necessary.

But as I began more and more to write about money, I decided to throw in “Personal Finance” in the tagline since it fit with the alliteration.

However, on this site at least, I’ll write whatever I want to.

So, I initially thought I should set the new tagline to Writing Whatever I Want To.

It still uses alliteration, but ut’s a bit long, and that dangling preposition is unnecessary.

So I cleaned it up and simplified it a bit.

So, I had decided on a name, but before I went all switchy-switchy on everything, I had to make sure things were available.

I tried a little over a year ago to change my Facebook page to just JoeHx but Facebook rejected the name change since I removed the “Blog” from the name. 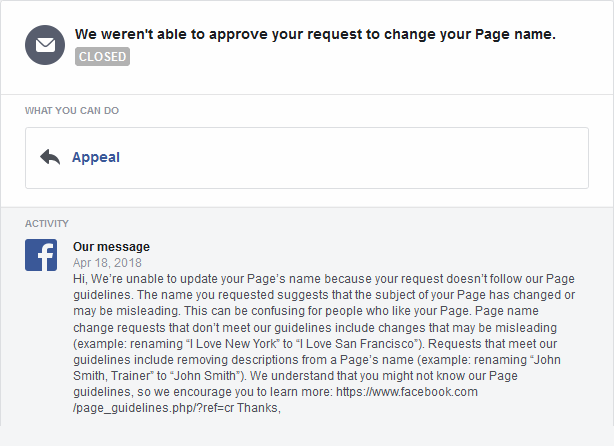 I had no problems switching to JoeHx Blog. Even though Facebook says the process could take a few days, the change was approved almost immediately.

I also made sure the username of the page - the part that is in the URL - was changed to JoeHxBlog as well.

On Twitter, @JoeHx has been taken (in fact, it’s been suspended). Thankfully, @JoeHxBlog has not. I did create another account to ensure no one takes my old @JoesGitHubBlog one.

I’ve already purchased JoeHxBlog.com. JoeHx.com is taken (it’s just one of those coming-soon-under-construction landing pages right now). Thanks to the European GDPR, WHOIS no longer gives owner contact information. I can’t contact who owns it to offer to purchase (it’s probably outside my price range, anyway).

I briefly considered Joe.Hx or JoeHx.Blog (or even Joe.Hx.Blog). Well, there’s no .Hx top-level domain. I buy my domains from Google. They don’t support the .BLOG ending.

Here are the domains Google does support.

Once I make the switch, I’ll have to update my domain on Google Search Console as well as see if I can get any backlinks to this site that I know of updated.

I’m not too worried about all the old comments I’ve posted on various blogs throughout the years. I’m still going to deliver the blog through GitHub Pages, which means hendrixjoseph.github.io and all its pages will have a 301 Permanent Redirect to the new site.

That’s how my other blog works - https://hendrixjoseph.github.io/puppy-snuggles redirects to https://www.puppy-snuggles.com/.

Hopefully, this will help any SEO link juice transfer to the new URL.

In preparation for the changes, I had to modify some of the “backend” code for my blog.

This blog is served via GitHub Pages, which uses a static site generator known as Jekyll.

I needed to go through every piece of my site looking for places where I typed in either the blog’s old name (Joe’s GitHub Blog) or the URL (hendrixjoseph.github.io) instead of referencing a variable.

It wasn’t too hard. I use Notepad++ at home, which has pretty robust text-search and replace capabilities. It took me no time at all, but I did hard code the name and URL way too many times.

The last thing I had to do is fix my default share image since it said “Joe’s GitHub Blog” on it. 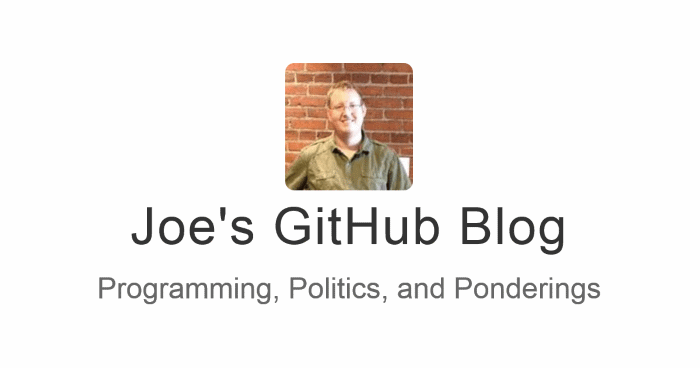 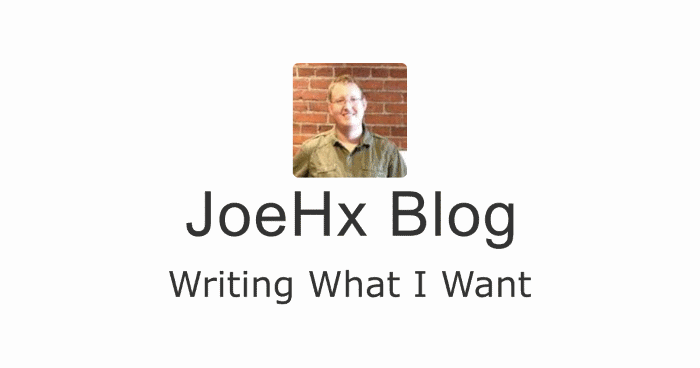 Just got changing the domain left, which I’ll probably do this weekend.

2 comments for Rebrand: From Joe's GitHub Blog to JoeHx Blog