Jumping on the never Trump bandwagon.

A couple years ago I needed some business attire, so I went to a chain anchor store at the local mall. While I was browsing the clothing, a sales lady asked me if I needed any help. I said, yeah, I’m going on a business trip and need something professional to wear! Well, the tie she chose for me just happened to be a Donald J. Trump branded tie: 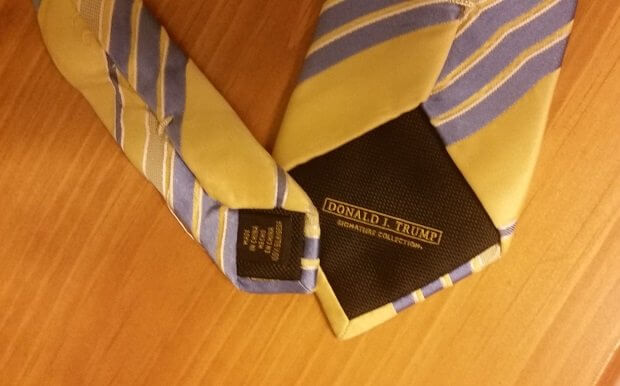 Then, I really could care less whose name was on the back of the tie. Honestly, I don’t really care now.

The interesting thing is that now Trump is a serious candidate for president. And here’s a tie, with his name on it, and it’s made in China. I know, I know, he’d probably tell me I know nothing about business. To be fair, when this tie was made and sold, even Trump probably had no idea he was going to run for president. Hell, he probably barely signed off to have a line of Trump ties. Collected money for the tie, sure.

Oh, and if you don’t like the idea of Trump or Clinton as president, you don’t have to waste your vote on either of them. Gary Johnson recently got the Libertarian nominee for president, and should be on the ballot in all fifty states. Or if that’s not your thing, there’s also Jill Stein. Don’t know how many ballots she’ll be on. I will have a preference for Gary, but vote your preference.