Recently I’ve downloaded a game onto my Android phone - Star Trek Timelines. The reason - other than for enjoyment and to occupy my time - is twofold: I want to publish my own Android game at some point, and I need to spend my Google Play credit I’ve earned via Google Opinion Rewards before it expires.

The timeline is in flux - converging on itself. It’s in disrepair. It needs to be fixed. And it’s up to the player (me, you, whoever) to repair the timeline. And for some reason, the damage to the timeline involves the mirror universe, as well.

The real-world reason behind the timeline being damaged is that it allows characters from throughout the history of the franchise to appear in the game. There are even characters from beta canon - most notably mirror Picard. I’ve yet to notice anyone from the Kelvin Timeline, which probably has something to do with the current ownership situation, although the intro screen says both Copyright CBS and Copyright Paramount. 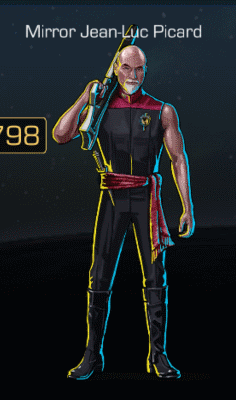 Star Trek Timelines has several different types of currency. Most of these currencies are earned in-game, however, one cost real-world money.

The one that costs real money is Dilithium, as in dilithium crystals. Dilithium can be used to buy in-game items and characters, as well as three of the other in-game currencies, namely Federation Credits, Chronitons, and Tickets.

Federation Credits can also be spent on in-game items and characters, albeit less powerful ones.

Chronitons are spent doing story missions. They regenerate over time until they reach a maximum. Since there are ways to earn chronitons, it is possible to have more than the maximum amount of chronitons - just no chronitons will be gained by waiting.

Tickets are spent doing some extra-story missions (side quests, maybe?) There are actually two types of tickets for the two types of side missions: Cadet Challenges and Arena.

As far as I can tell, two of the other types of currency in the game cannot be bought, but only earned. These are Honor and Merits. Both can be earned by doing various activities, however, Honor can also be earned by dismissing crew members (meaning you get rid of a character and cannot use them anymore).

What Can You Do?

The bulk of the game - well, the bulk of almost any story-based game - are the story missions. In Star Trek Timelines, you warp from location to location helping (or hindering) various characters from throughout the timeline. Your decisions affect the outcome of… well, I’m not sure how much your choices affect anything, but the game at least tries to make it appear as if “the balance of the timeline will forever be affected” with each choice you make.

Story missions take two forms. The first mission type is an Away Team Mission. An Away Team mission consists of two parts. First, there is the crew selection, where you choose three characters to go on the mission. The second part is the mission itself, which consists of completing several tasks in a non-linear fashion. Each task is completed by one of the crew you chose in the crew selection, and you either accomplish the task or fail the task. Whether or not you fail is determined by a trait. If your character’s trait is high enough, you pass the task. If it is too low, you fail. There’s also a medium number where you may or may not pass the task. 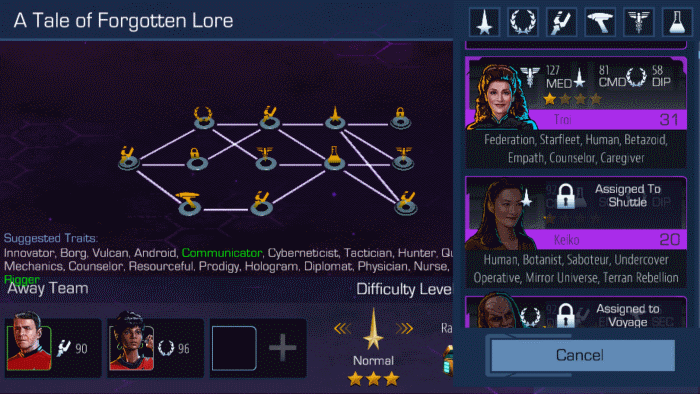 The second mission type is a Ship Battle. Ship Battles are more interactive than Away Team Missions. Again, there are two parts - crew selection, and then the actual battle. Each crew provides a special ability that can periodically be used during the battle. Different ships have different abilities as well.

The goal of a ship battle is to destroy the other ship. Ships have two types of hit points that have to be depleted in order to be destroyed: shields and hull damage. Shields have to completely destroyed before any hull damage can be done. Shields also regenerate so long as they have not been completely depleted. Hull damage does not regenerate. 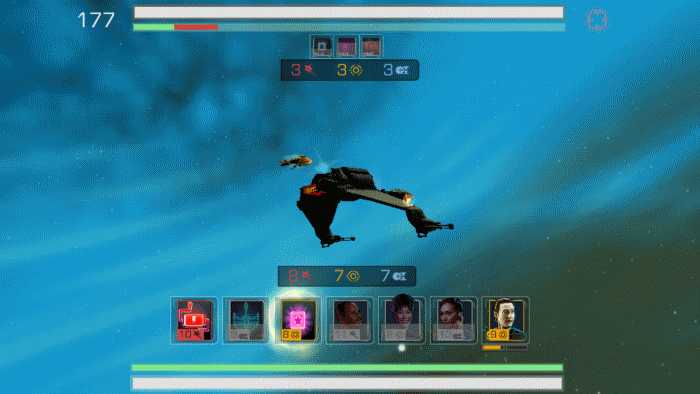 There are two types of missions where you send out crew for a period of time - anywhere from a few minutes to several hours in real time. While the crew you’ve selected is out, you cannot use them for other missions.

With Faction Missions, you choose several crew (the number varies depending on the mission) to accomplish some sort of task. As far as gameplay goes, the actual task is irrelevant. There is a percent bar that fills up as you assign crew. This percent bar never reaches 100% - the most it can reach is 99%. The goal is to get it as full as possible, and you can do this by matching traits of each crew to each crew slot. You can further fill the percent bar by adding a boost to the mission.

When faction missions complete, you have to go to the faction screen and click complete to collect any rewards. 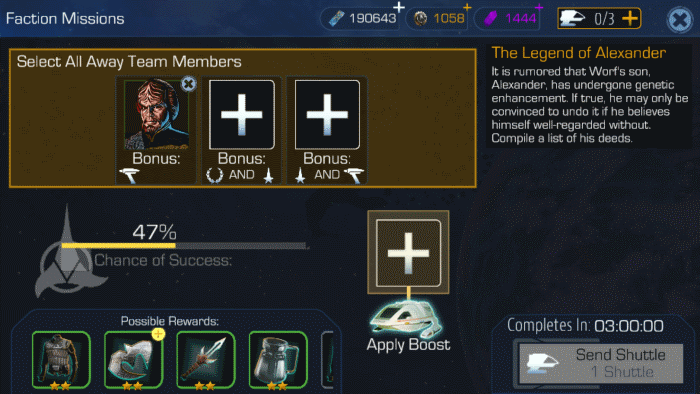 Assiging Crew to a Faction Mission

Voyages are similar to Faction Missions, except there’s no set task to complete. You also select more crew for a Voyage than you do for a faction mission. The goal of a Voyage is for it to last as long as possible. That being said, Voyages do no complete on their own - you have to recall them on your own.

Each Voyage spends antimatter - and you only have so much antimatter. The amount depends on your crew and your ship. I find that typically 1,000 antimatter is spent in an hour. If you run out of antimatter, you either have to spend a few dilithium to recharge (remember, dilithium costs real money), or abandon your mission and forfeit any earned rewards.

Every two hours your Voyage pauses for a dilemma. Dilemmas are little stories where you have to make a choice. I don’t think your choice matters much in the long term, and have come across the same dilemma twice and chose a different outcome each time. The good thing about dilemmas is that since it pauses your Voyage, no antimatter is spent while it awaits your response. 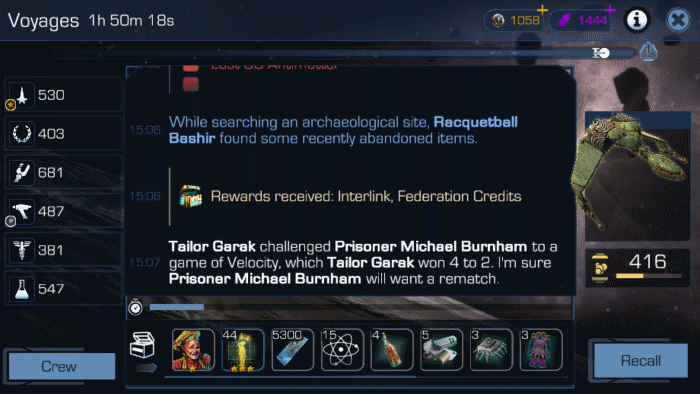 The Gauntlet is sort of a player-vs-player between two characters. Two skills are chosen at random, and points are semi-randomly assigned based on those skills. Whoever has the most points wins.

Being new, I’ve barely won any Gauntlets. The most enjoyable thing about Gauntlets is that I can see what characters are available in Star Trek Timelines. For instance, it is in the Gauntlet that I’ve seen mirror Picard. 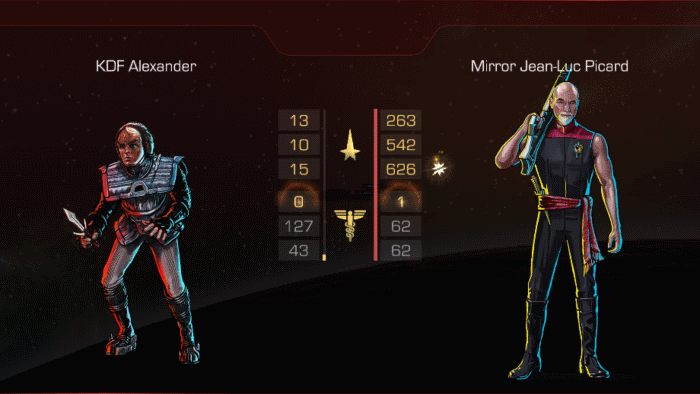 Adult Alexander (me) vs Mirror Picard in the Gauntlet

Like most games, leveling up characters is how to increase their skills. And, of course, the higher their skill points, the more likely you are to accomplish the other various missions.

Leveling up crew involves gaining experience. It also involves equipping characters - only ten levels at a time can be gained without equipping four items on a character. Each of the four items on a character is specific - you don’t have a choice as to what item to equip. You can either acquire these items through missions, buy them at various stores (which may or may not involve real money), or replicate them. 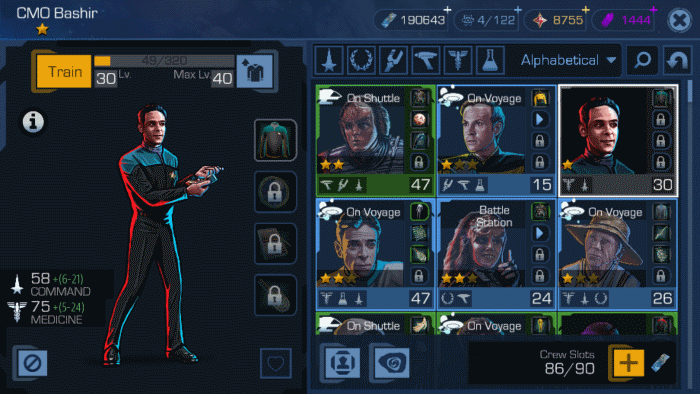 What Makes It Addictive?

Star Trek Timelines has a number of Daily Missions that the play is encouraged to complete each day. 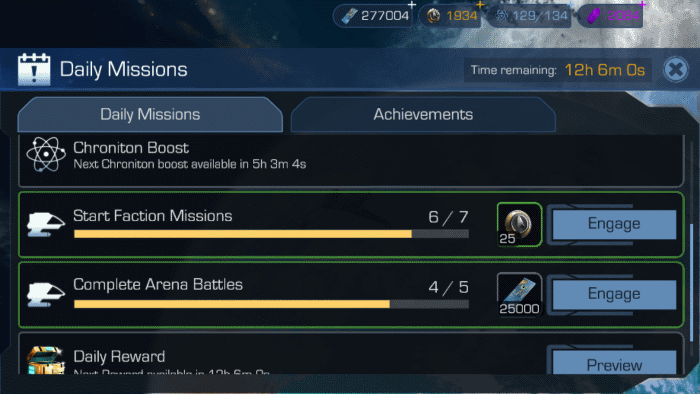 But really what makes me open the game is the timed missions - which are the very missions that make me set the game down for a few hours while those missions complete. I feel as if I need to optimize the hours in a day to complete as many of these missions as possible.

What Do I Think?

For the first question - yes, I think Star Trek Timelines would still be a good game even if it did not carry the name Star Trek or used any of its properties.

For the second question - probably not. I doubt I would have even heard of Star Trek Timelines had it not had Star Trek in the title.