August was a good month for reading. I read four books for myself and eleven different books to my five-month-old son. I guess all the free time from being done with school has really paid off!

The first three of these books were ebooks given away free by their authors. That said, they weren’t worthless, in fact, they were actually pretty decent.

Retail Arbitrage is Chris Green’s first book, and probably one of his better ones, too. He routinely gives away his ebooks for free on one of his Facebook groups.

Java Interview Guide was better than I expected. Typically I have low expectations for interview guides - I expect them to have a bunch of irrelevant trivia that is intended to be memorized. This ebook has information that would be good for any Java developer, even if they already have a job and no need to prepare for an interview.

I actually left a review for Turning Your Blog into a Book: “Quick read, but quite motivating. Actually has a couple of actionable ideas that make it worth reading more than just the title.”

Finally, Cybercrime and the Darknet. I don’t know what to say about this book. It tried to read like a textbook, except without end-of-the-chapter questions. It was well researched, or at least it had an appendix with pages after pages of sources. That said, it would sometimes get facts wrong - for instance, it assumes that social engineering, such as phishing, is not hacking. The writing felt amateurish, although that could be that its author is British. Finally, it had an obvious pro-government, anti-libertarian bias.

Not only did I read all eleven books above to my son in August, but I also read a few of them several times. What I think is especially cool is that he is starting to look at the book when I read to him. Sometimes, at least. Other times the ceiling fan is much more interesting than the book, or whatever it is mommy happens to be doing at the time. But he is starting to look at the pages as I read. 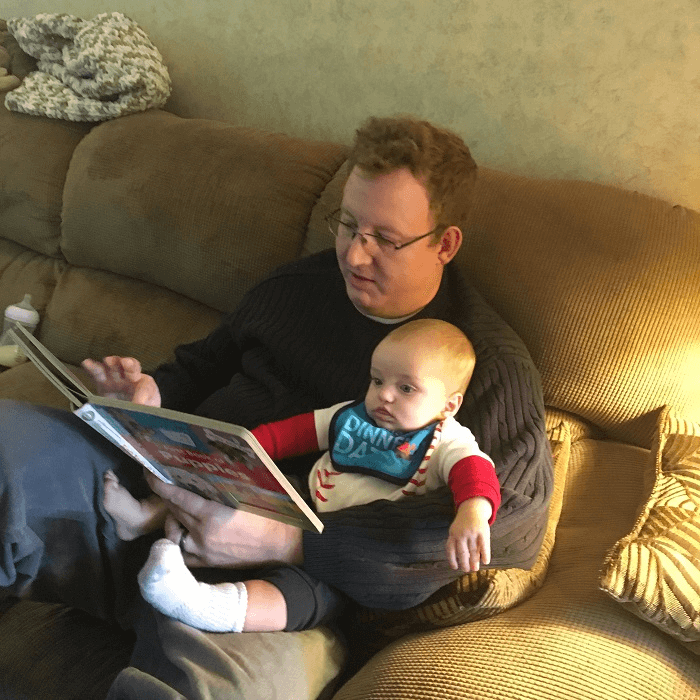 Reading to the little guy.

My wife has come up with a new “rule” about reading to our son. We are each to read to him three times. It can be the same book three times, three different books, etc. Honestly, neither of us has been keeping this rule very well. Let’s see if I can keep up for the month of September!