This year has been interesting, to say the least. What’s been particularly interesting this past month - or at least since the Memorial Day killing of George Floyd - is the sudden push on the American consciousness that Black Lives Matter.

(Yes, it’s a “privilege” to merely say that it’s “interesting.” I might make a post one day on my thought on the word “privilege.”)

Various companies, always eager to jump on whatever popular bandwagon there is, began changing their social media logos in solidarity. Many did more meaningful gestures and donated money to support the Black Lives Matter movement.

And, of course, what seems to make the biggest uproar is the idea that they might change the names, logos, and mascots of some popular brands.

Brands like Aunt Jemima, Uncle Ben’s, and Cream of Wheat.

The brands in question.

So what’s wrong with “Aunt” Jemima and “Uncle” Ben? At first glance, I didn’t see the problem. Calling someone “Aunt” or “Uncle” is affectionate, right?

This Facebook post from Chris Spangle gives some historical context to the “Aunt” and “Uncle” labels - particularly for Black people: 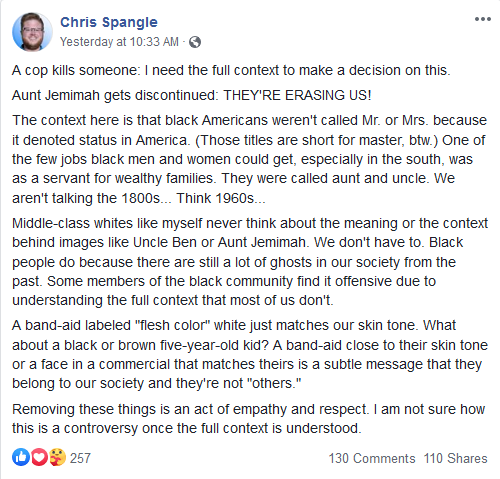 That’s right - if Aunt Jemima and Uncle Ben were not black, they might be known as “Mrs. Jemima” and “Mr. Ben.” So we’d have “Mrs. Jemima Syrup” and “Mr. Ben’s Rice.” It also gives you some context into Uncle Tom.

What’s worse than the name of “Aunt Jemima” is the fact that the character is based off a harmful stereotype.

From the Wikipedia article on Aunt Jemima:

Aunt Jemima is based on the common “Mammy” stereotype, a character in minstrel shows in the late 1800s. Her skin is dark and dewy, with a pearly white smile. She wears a scarf over her head and a polka dot dress with a white collar, similar to the common attire and physical features of “mammy” characters throughout history. A character named “Aunt Jemima” appeared on the stage in Washington, D.C., as early as 1864.

I’m unsure if Uncle Ben is based on such a stereotype; the Wikipedia article is silent on whether it is or not. Uncle Ben is supposedly modeled after an African American rice farmer from Texashttps://www.morphologicalconfetti.com/2006/02/frank-brown-aka-uncle-ben.html) rather than a caricature.

Some may say these changes are merely virtue signaling (which may not necessarily be a bad thing after all - see this blog post and that blog post).

But renaming a brand to be more “polite” isn’t without precedent.

I present to you Roddenberry’s Cane Patch Syrup. (Unavailable on the Amazon site last I checked, but at least you can read some reviews.)

The source for this bit of information? I read it as a teen in the book Star Trek Creator: The Authorized Biography of Gene Roddenberry. That’s right, Roddenberry’s Cane Patch Syrup is the same Roddenberry (family-wise, not the same person) as Gene Roddenberry, the creator of the beloved science-fiction franchise Star Trek.

Do I Think the Brands Need to Change Their Name?

Ultimately, I think it’s up to the brand owners whether to change their name or not.

I do think - understanding the context of the name - the names should be updated or changed. Think about how Cane Patch Syrup’s name changed.

I’m not so convinced the mascots need to be removed. Maybe updated to be a bit more respectable - especially in the case of Aunt Jemima - but I feel if we remove all minority mascots from food, we’ll only have white people mascots (such as Colonel Sanders, Little Debbie).

What to do to Aunt Jemima? While satire, this Onion article isn’t far from the mark: Quaker Oats Replaces Historically Racist Aunt Jemima Mascot With Black Female Lawyer Who Enjoys Pancakes Sometimes.

And while I’d rather an end to police brutality than simply changing a mascot, I think it’s a step in the right direction for these brands. Besides, it’s not an either-or situation.

But, yeah, priorities. I leave you with this tweet:

Just so we're clear, white people, firing Aunt Jemima & giving us Juneteenth off are not the frontlines of defeating white supremacy & dismantling structural & instutional racism. Better schools, a just criminal justice system, access to healthcare was more what we were thinking.