Early this year, around the start of spring, I had planned on a birthday surprise for a certain milestone birthday of my wife.

My wife’s birthday is on the last day of March. This year, being 2020, COVID-19 happened. Things were shut down. We started working from home.

And my wife’s birthday surprise was canceled.

Thankfully, indefinitely has and end. So a couple of weeks ago I called and rescheduled her birthday surprise.

Did I mention at this point the surprise was no longer a surprise? I’m not very good at keeping secrets from my wife. That’s mostly a good thing, of course, but she was able to guess - with a few hints from me along the way - what her surprise was.

I initially rescheduled for the morning of Saturday, September 19th.

Alas, Saturday, September 19th was not to be. The night before we called the flight line to see if the ride was still on - and it had been canceled due to the weather forecast (high winds or some nonsense like that).

I suppose ballooning is more sensitive to weather than heavier-than-air flight. Especially if you’re bringing passengers along who’ve never been.

The kids were already spending the night at Grandma and Grandpa’s, so we slept in the next morning and had breakfast out together at Tank’s Bar & Grill. I had a large stack of pancakes, bacon, and sausage with a water and coffee. She had an omelet of some kind with water and a drink.

The logo for Tanks Bar & Grill

Oh, and I rescheduled the balloon ride for the following Saturday, September 26th, 2020.

Friday evening rolls around and I call the flight line. The ride is on.

Way early. But we get there right on time - even though we had to turn back because we forgot to grab our paperwork.

Hurry Up and Wait

We’re there with a few other people at 6:45 am. We watch a short safety video and then head out to a grassy patch right off of the tarmac to our balloon Lady Blye and our pilot Mike.

You see, we can’t take off until after sunrise. Which was 7:28 am that day in Lebanon, Ohio.

Also, we couldn’t take off because it was too foggy. We had to wait for the fog to lift until there was one mile of visibility. 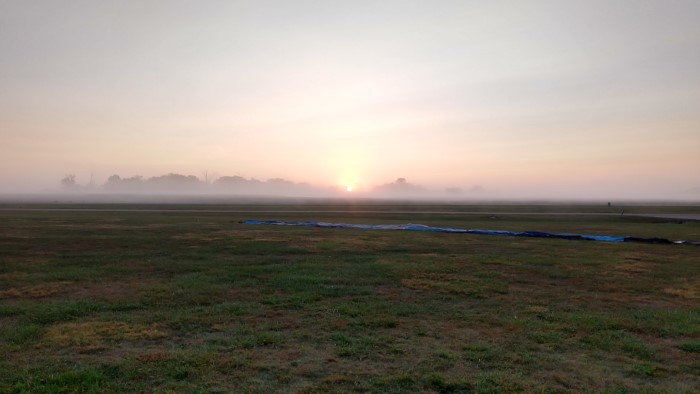 The sun rising that day among the fog.

Oh, and we had to take off before 8:30 am, otherwise the morning sun would cause too much turbulence in the atmosphere.

Eight o’clock rolls around, and it’s still too foggy. It looks as if the ride will be once again canceled.

Thankfully, though, the fog did lift just in time.

We began inflating the balloon by 8:16 am. Hot air balloons are initially inflated cold using a gas-powered fan. 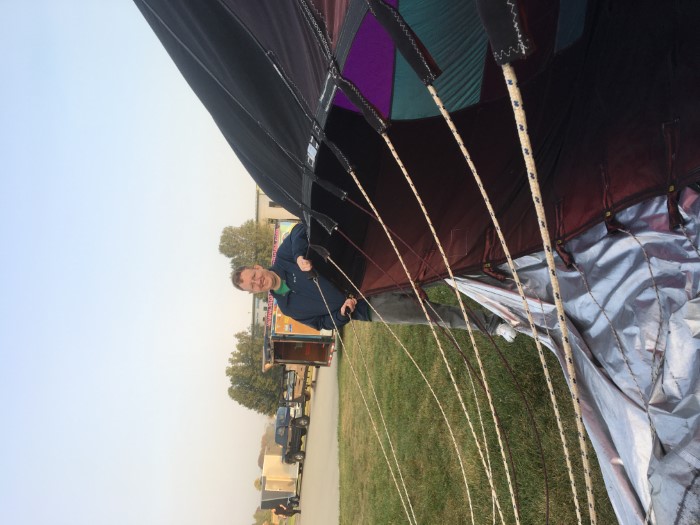 Me holding the balloon open for cold inflation. 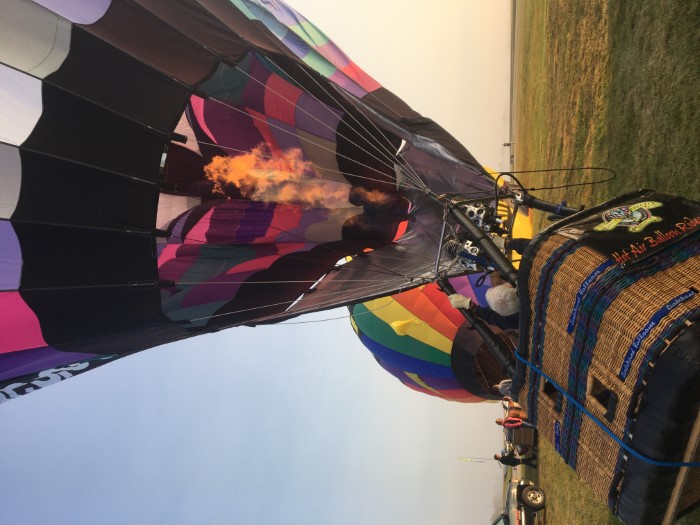 Our pilot inflating the balloon with the burner. 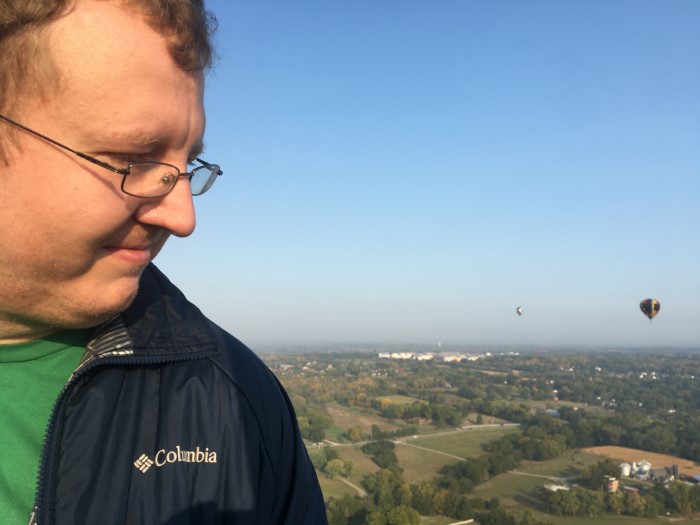 Me, looking at the ground with two other balloons in the background. I swear this isn’t an ad for Columbia.

We took off from Warren County Airport. Where we went, well, that depended on the wind.

The pilot can control the balloon in two different directions: up and down. It’s the wind that decides where we go.

So we went northeast for nine and a half miles in just over an hour and a half. And not in a straight line, either: 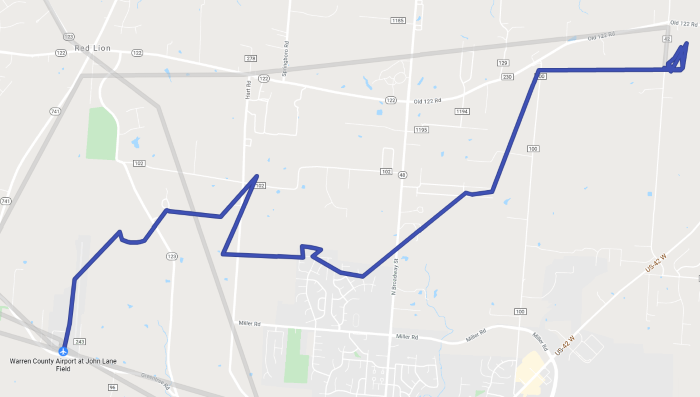 Our path, according to my Google Timeline.

Of course, the miles and the time are about, so that does make the speed about.

Thankfully, the landing was smooth. Or as smooth as it could be, given we were in a balloon and landed in a roughly-plowed field.

But we didn’t tip over. We almost tipped over while waiting on the truck and trailer to find us, but we didn’t.

The roughly-plowed field was on a farm called Wiedalou Farm and the owner was excited to see us. It turns out that he and our pilot knew each other. In fact, the field owner brought out his kids and thanked us for landing in his field. 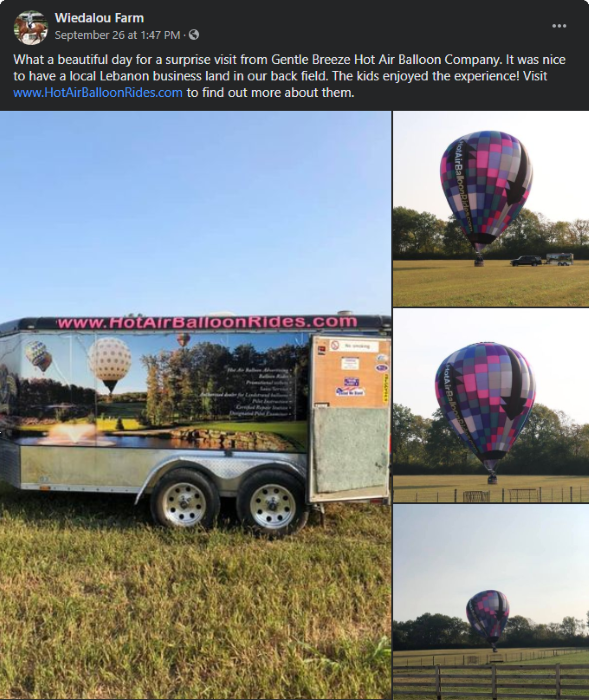 We all helped put the balloon away into its bag. It wasn’t hard, but it wasn’t easy. 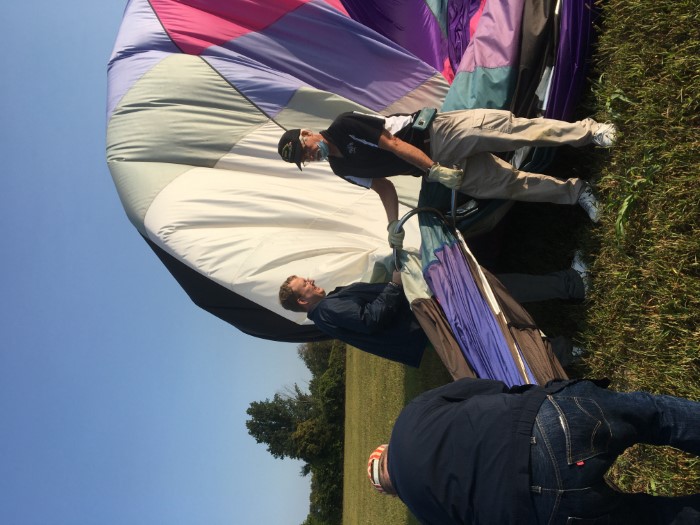 Wrapping up the balloon. 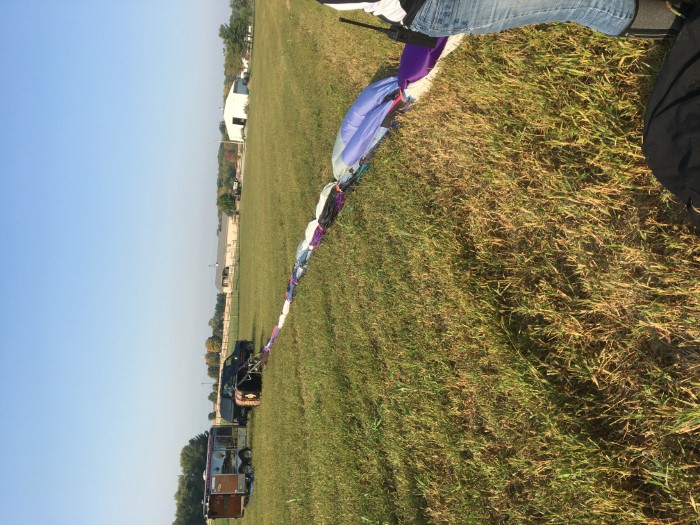 The balloon all stretched out ready to be put into its bag.

My wife was thrilled and enjoyed herself. Afterward, we stopped by the Lebanon County Applefest for lunch, and then straight to her parents to pick up the kids. 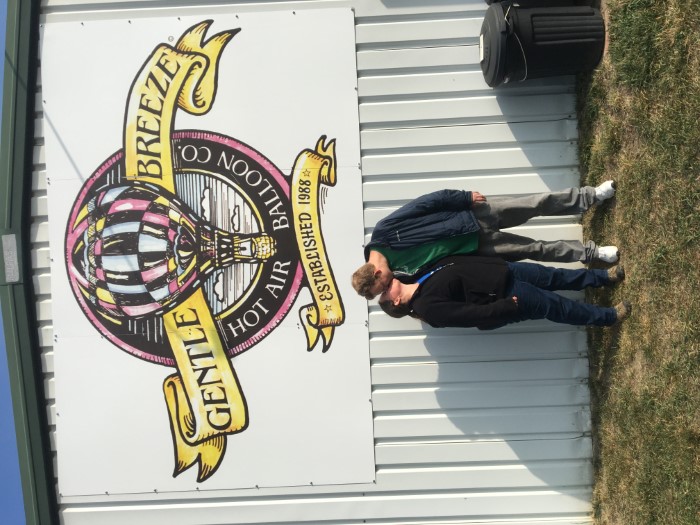 Wife and me underneath the Gentle Breeze Hot Air Balloon Co. logo.