October. The first full month of Autumn. The air begins to cool. Sweaters and light jackets become necessary. At the end of the month, it’ll be Halloween, which means it’s time to carve jack-o-lanterns.

And that’s what we did over the weekend.

We picked up a couple of free pumpkins for the kids from Coldwell Banker’s Pumpkin Giveaway. Normally, they not only give out one free pumpkin per kid but also will take a nice family photo for free. However, this year due to the ongoing COVID-19 pandemic, they only had a drive-through in which they handed out the pumpkins.

We got our other two pumpkins for $2.99 each down the road at Aldi.

My son is now just over two-and-a-half. While he’s still largely unaware of the idea of holidays, he’s got a much better grasp of what’s going on around him than he did a year ago. On our way home with the pumpkins, he asked “are we going to eat the pumpkin?”

He thought they were for lunch. How he expected to eat them, I don’t know.

After lunch… after naps… and after dinner, it was time to carve the pumpkins. 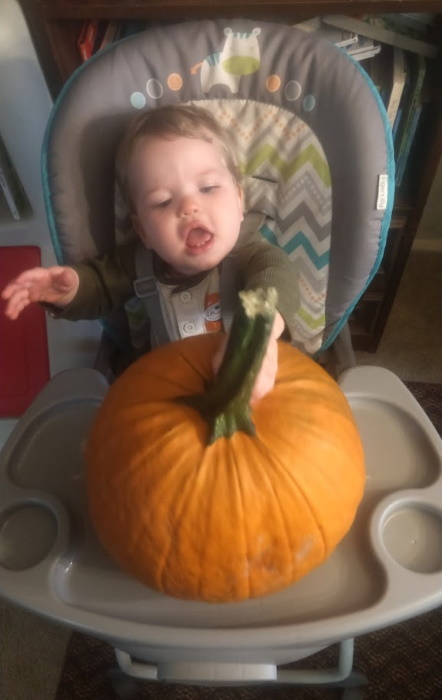 My daughter sitting in her high chair checking out her pumpkin.

After seeing and feeling the pumpkin guts, my son wasn’t too interested. I wasn’t surprised - after all, I didn’t like getting my hands dirty when I was his age. I didn’t even like fingerpainting.

But he did like painting one of the pumpkins. 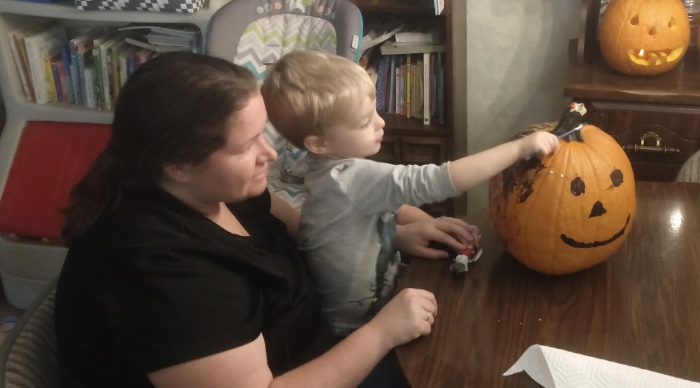 My son and wife painting a pumpkin.

We (the parents) ended up carving three of the pumpkins. My son said that one of them looked “happy” and the other looked “mad” so I tried to make the third look “sad.”

The pumpkins carved and painted.

I did save and roast the pumpkin seeds in the oven, so my son’s idea that we’d end up eating the pumpkins wasn’t completely wrong.

Cooking the pumpkin seeds was pretty simple. I did look around the internet for some ideas on how exactly to roast them, but I ended up doing things my way with some influence from what I read.

Here’s what I did after I separated the seeds from the pulp and patted them as dry as I could with a towel:

I laid them as flat as a could on a baking sheet, and then drizzled some olive oil across them and shook some Italian seasoning on them.

I then placed them in the oven that was pre-heated to 325° for 20 minutes.

After the twenty minutes, I checked them and thought that they needed to be crispier. At this time, my wife suggested that I put some garlic powder on them, so I did along with some salt.

I meant to take some pictures, but we ate all the seeds before I remembered. ¯\(ツ)/¯