Applying for a Spot on the Planning Commission of Huber Heights

Last month I had an interview for a volunteer position for the City of Huber Heights. Specifically, the position in the Planning Commission.

I’d heard about the position on a Huber Heights Facebook group. Since I’m interested in how government works and have a desire to serve, I thought I’d apply.

The application was much like a job application - it had the usual spots for contact information such as name, address, phone number, as well as background questions like work history and education history.

It also has a short answer section called “statement of interest.” Here I was I wrote: 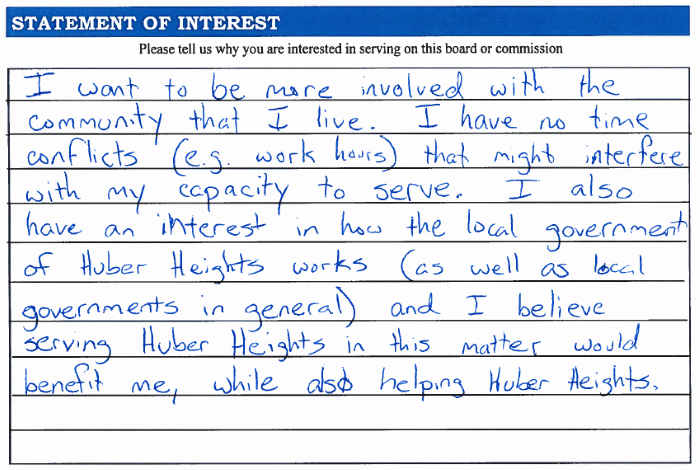 I scanned the application an emailed it to the clerk of council:

From: Me
To: Clerk of Council
Date: Friday, August 30, 2019, at 4:08 pm
Subject: My application to the Huber Heights Planning Commission

Attached is my application to the Huber Heights Planning Commission.

Thank you, and I look forward to serving.

Since the following Monday was Labor Day, I didn’t receive a response until Tuesday:

From: Clerk of Council
To: Me
Date: Tuesday, September 3, 2019, at 4:07 pm
RE: My application to the Huber Heights Planning Commission

I am in receipt of your application for the Planning Commission dated August 30, 2019. I will be in touch in the near future to discuss the selection process once determined by City Council. Thanks,

The very next day - Wednesday, September 4th, 2019 - I received a phone call from the city. Typically I don’t answer phone calls - I get way too many robo spam calls - but the number was from my area code. And hey, I was expecting a call.

I forgot exactly who I spoke to, but I was asked if I could come in for an interview.

First things first - I reviewed the part of the Huber Heights City Charter that establishes the Planning Commission:

The Council, by ordinance or resolution, shall designate the Planning Commission to serve as the platting commission of the City; and the Commission shall have control of platting and shall recommend regulations to Council covering the platting of all lands within the City.

The Planning Commission shall recommend to Council, for the Council’s adoption with or without revisions thereto; a comprehensive general plan or revisions thereto for the physical development of the City, which shall include, but not be limited to; the location of public ways, property, bridges, utilities, buildings, parks, playgrounds, bikeways, and recreation areas. The comprehensive general plan shall show all existing school locations in the City and shall show the projected locations of all new schools as determined by the governing board of the appropriate school district.

The Planning Commission shall prepare and recommend to Council such ordinances and resolutions as will promote the general welfare of the City and its inhabitants; recommend for the Council’s approval, a base map to be titled the “Official Map of the City of Huber Heights”; and exercise control over the subdivision of lands and the improvement or development thereof as authorized by the City’s ordinances and resolutions.

Fun fact: every application for the Planning Commission is public record and available via the Huber Height’s webpage.

That means I could look at everyone’s application.

It turns out there were six applications for the planning commission. Four of these applicants were “previous applicants” and were not going to be reinterviewed.

Of course, I’m one of the other two. The last person was also being interviewed the same evening I was - right after me.

If you couldn’t guess it from the previous paragraphs, the interview schedule is also public record and freely accessible via the Huber Height’s webpage.

Although anyone reading this could easily go find the names of the other applicants, I won’t list them here. I’ll give them at least some semblance of privacy.

Day of the Interview

The interview was almost immediately after work. So after I stopped at home and had a quick bite to eat, I walked on over to City Hall.

City Hall is just down the road from me - about two city blocks if our city had blocks - so I see no need to drive there. Besides, I need the exercise. 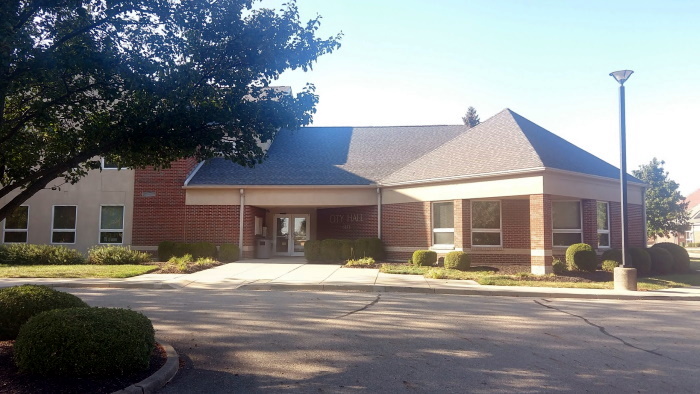 I arrived about fifteen minutes before my interview.

Six of the eight councilmembers were there, along with the mayor, the clerk of council, and the chair of the planning commission.

We sat around a long table - with me at the head- and they each asked me one question.

I was able to answer each question and even expand on it, but I feel as if I were more nervous than I should’ve been.

No. I didn’t get a position on the planning commission. According to the minutes for that evening, someone else was chosen that very night. There have even been some rumors that the person was selected even before any interviews were held.

But those are just rumors.

A couple of weeks later, I received a rejection letter from the city: 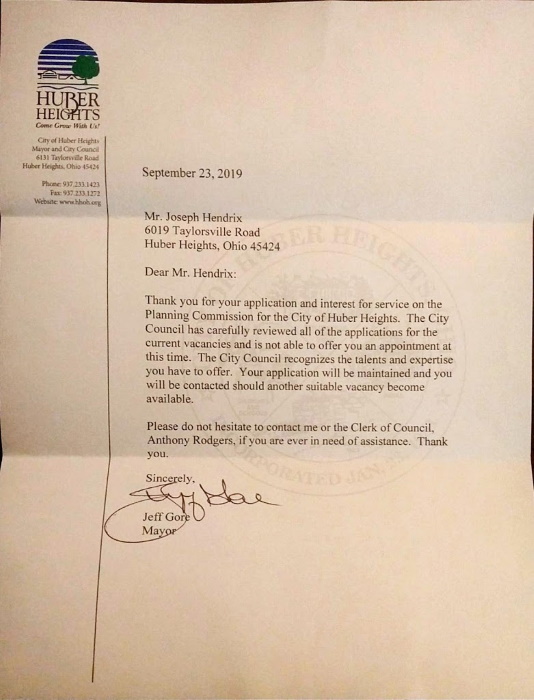 I don’t chalk this up as a failure, though. As someone once said, “You either succeed or you learn.”