I was working on my fiancee’s car over the weekend when the power button on my Samsung Galaxy S5 stopped working. This was particularly frustrating because I had the flashlight on at the time and didn’t want to drain the battery.

I use the power button to turn the screen on, so at first I thought the screen wasn’t working. I figured I needed to turn the phone off, and since my hands were coated with oil, I took the phone to my fiancee and asked her to remove the battery. For whatever reason, she turns the screen on using the home button. When I saw her turn on the screen her way, I told her I just needed the flashlight off.

Initially, I was concerned that some of the chemicals I had been working with - oil, brake clean, etc. - had gotten into the phone. When I Googled the problem (I used the search term “samsung galaxy s5 power button not working”) I came across this solution which linked to this image.

The post suggests putting a piece of a post-it note behind the power button assembly beneath the phone case. I didn’t need to do this - I gently squeezed the assembly (see image below) and heard it reconnect with a small “snap.” I tried pressing the power button again, and voila, it worked! 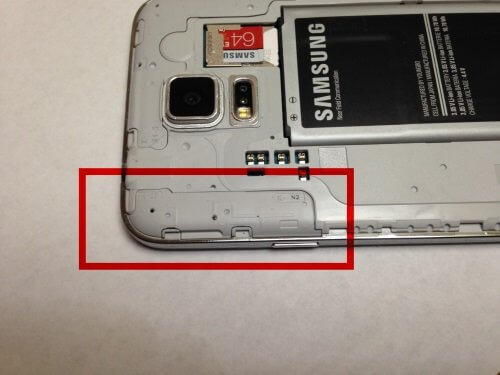