My Experience at an Investment Basics Seminar

Towards the end of last month (January 27th to be exact), my wife forwarded me the following email: 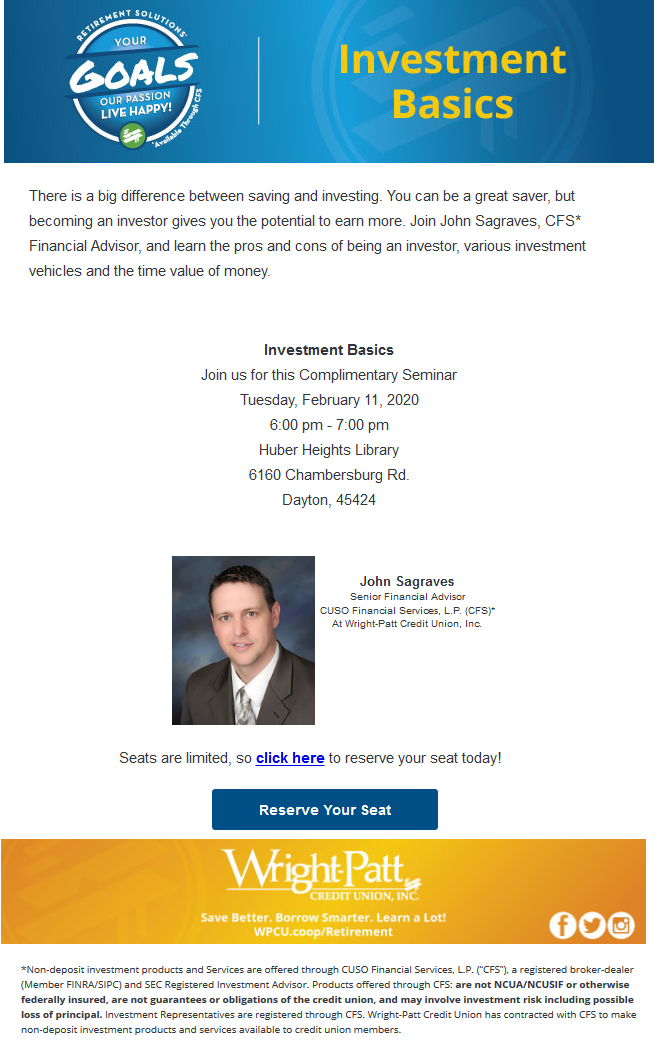 Here’s the text in case you’re using a screen reader or want something copy-pastable:

There is a big difference between saving and investing. You can be a great saver, but becoming an investor gives you the potential to earn more. Join John Sagraves, CFS* Financial Advisor, and learn the pros and cons of being an investor, various investment vehicles and the time value of money.

Seats are limited, so click here to reserve your seat today!

(A link to a web copy of the email was provided as well.)

I expected that this “Investment Basics Seminar” to be mostly a discussion about retirement accounts - 401k’s, IRAs, Roths, maybe even solo 401ks for the self-employed.

I thought maybe different asset classes would be discussed - e.g. stocks vs bonds vs real estate.

I’d be a bit impressed - but not surprised - if some of the more detailed nuances would be discussed - for instance, the price-to-earnings ratio of a stock, or APR vs APY.

I would be especially surprised if “the Greeks” were mentioned. (The Greeks, for those who don’t know, have something to do with options. “The Greeks” being Greek letters that represent certain numeric variables in options trading.)

The class (ahem “seminar”) was in the community room of the local public library. My wife and I have been to this library several times (after all, libraries are awesome) and even taken other classes in this particular community room. 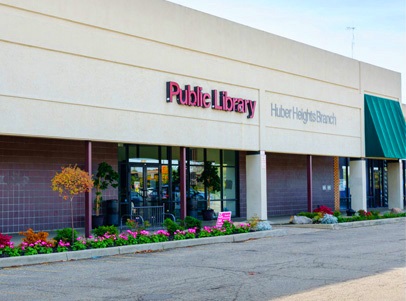 The library is in a strip mall with other businesses and facilities.

We got there a few minutes early (my Google Timeline says we got there at 5:57 pm) and, thankfully, there were already several people in the classroom, along with the presenter. No awkward waiting.

The presenter, by the way, was John Sagraves. He works for the largest credit union in our area but used to work for 5/3 doing pretty much the same thing. He was also the only one in the room in a suit and tie; everyone else dressed casually.

Speaking of everyone else, there were a total of nine other people - so that’s eleven attendees if you include me and my wife. A few people showed up late, and one person left “early” - really 15 minutes after the scheduled end but also 15 minutes before the presentation was finished.

What Was Talked About

Much to my surprise, the focus was not on retirement accounts.

Instead, the focus was on types of investments, the reason for investing, and the effect of time and inflation on investments. There was a bit of discussion on Roth IRAs and 401k’s - but mainly because the audience brought it up.

He used a PowerPoint presentation and mostly just read the slides, but he did provide some extra content outside of the slides. 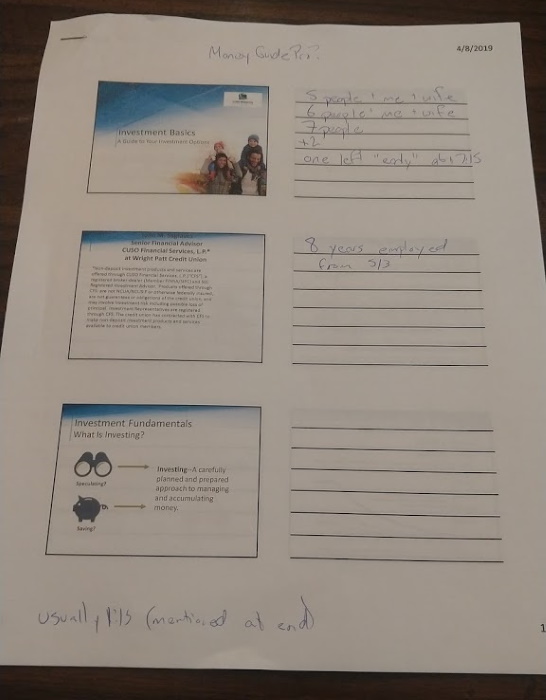 A printout of the PowerPoint slides.

To recap some of his slides, here’s what he discussed:

He also discussed dollar-cost-averaging, speculation (he specifically mentioned bitcoin), and the difficulty of getting people to more aggressively invest their money.

One thing I really liked is how he said that the last ten years has really spoiled us - there are people who didn’t start investing until after the 2008 crisis and have never felt a loss in their portfolio.

At the end, he passed out the following questionnaire and asked people to fill it out: 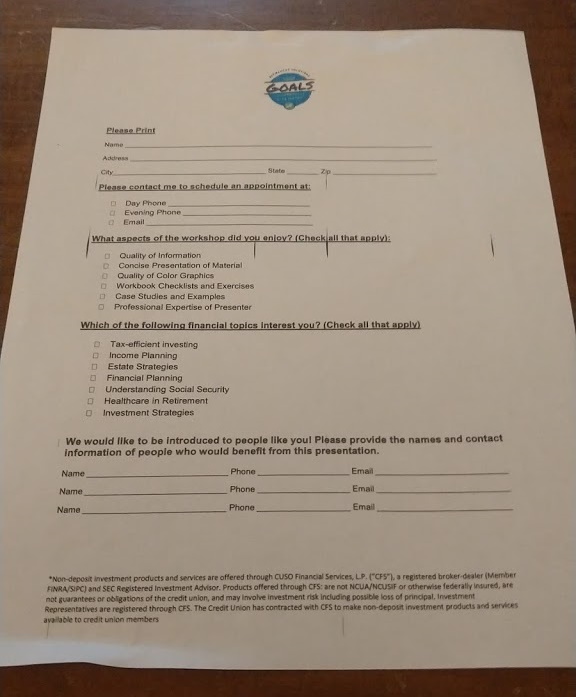 I didn’t fill out the form - I’m too worried that someone is going to try to sell me something I don’t want. I think my wife filled out one, though.

All in all, the one-hour seminar took an hour-and-a-half, and not everything was covered that the presenter wanted to cover. But it was interesting to see what was presented and how it was presented.

This post was inspired in part by the following posts on ESI Money’s blog:

1 comment for My Experience at an Investment Basics Seminar