Petitioning During the Pandemic for a Seat on City Council

This year there’s an election for the council seat in the ward of the city I live in, and I want to run for it.

This year - and last year - there’s a worldwide pandemic. Chances are you know about it. Hopefully, with the vaccines that have been rolling out for a month now, the pandemic will be over soon.

That said, I still need to petition. I figured I’d write down a bit of the timeline of my petitioning efforts so far.

I called the Montgomery County Board of Elections and told the gentleman who answered the phone that I was interested in running for a council seat in my local city.

The Montgomery County Board of Elections logo.

The guy was knowledgeable and competent - he answered all my questions before I could even ask them.

I know, I know, I could’ve looked a few of these up on my own. However, there’s often a difference between what the rules say and what people actually do.

Now I have to go petitioning - I have to get at least 50 valid signatures, but I cannot turn in more than 150 signatures (three times the number of valid needed).

Traditionally, petitioning involves going door to door to collect signatures. And despite attempts to change that over the past year due to COVID-19, the courts (particularly the Sixth Circuit and the U.S. Supreme Court) have declined to loosen petitioning requirements.

Today’s the day I decided to start petitioning.

I don’t just go door-to-door randomly - I do some prep work.

Oh, and of course I print my petitions and get the most important signature of all - my wife’s. I also print a walk list for the road I plan on walking up and down - which, so happens, to be the road I live on - splitting the list so that the odd numbers are on one side, and the evens are on the other, just like a real road.

In addition to the petitions, I brought a blank piece of paper to write down any questions someone asks or comments someone makes - I intend to write them down no matter how stupid or silly they sound.

Finally, I prep for petitioning during a pandemic: I get a couple of masks, a small thing of hand sanitizer, a few packets of alcohol wipes, and a dozen or so pens. Why so many pens? Each time someone signs my petition, I will put the used pen into my right pocket, and get a clean one out of my left. 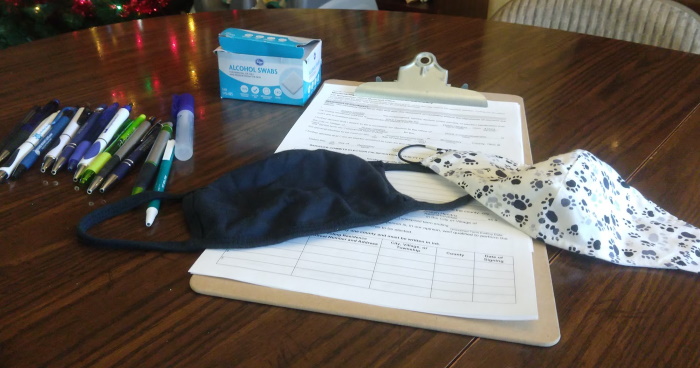 My supply of masks, pens, alcohol wipes, and hand sanitizer sitting atop my petitions and clipboard.

So how did my petitioning go? I knocked on a total of 18 doors. Almost no one answered their door (maybe they weren’t home?). One person declined to sign, and two people did sign.

After I got home from petitioning, I posted on a local Facebook group that I’m looking for signatures. I got three more signatures that way: two from one household (they even have me come inside, sit down, and talk about their concerns!) and one person came to my house to sign.

Maybe no one was home the first time I went out petitioning because it was a workday. I decided the next time should be a weekend, so I went out Saturday, January 2nd, 2020

And I did feel as if I had more success this second time around. I still went on the same road I live on, except in the opposite direction. This time, I knocked on 32 doors and got 12 signatures.

Don’t be afraid to be honest.

Initially, when someone asked me a question, I had a flair of anxiety and was worried that I would answer incorrectly. Me being me, I answered honestly rather than give in and tell them what I thought they wanted to hear.

It turns out that my concerns - namely, transparency and spending - are the same concerns other people have. Also, people are rather receptive to the idea that my main goal - should I be elected - is to listen.