Square Closed My Cash App After I Received Over 1,600 Referrals in One Weekend

It started innocently enough on Monday, March 2nd. I simply received a $10 referral for referring someone to the Cash App.

Tuesday, March 3rd came and I referred two more people. Cool - that’s $30 I made in two days for basically nothing.

That’s $150 in referrals across three days for reasons I still don’t entirely know.

Things started getting crazy on Wednesday, March 5th. I can’t even count how many referrals I got.

The next day, on Thursday, March 6th, I started getting a little concerned that something is going awry. I ask some people on Reddit if they have any input:

I tweeted on Twitter to see if anyone has anything to say:

So I have gotten over 800 referrals from a certain well-known app in the past few days - and keep getting more. At $10 a pop, that's over $8k. Should I contact the company and see if everything is ok? pic.twitter.com/oNsU8JHQZG

Did some analysis (aka Excel pivot tables) and I am getting less referrals at night - which makes it sound more legit. pic.twitter.com/tkAgIlH201

The last of my Cash Referral Emails.

Even though the math is easy, I’m still wondering if I got the math right.

But my math is right, and Square, rightfully so, didn’t want to pay out over sixteen grand - especially to someone who rarely uses their service.

I was able to withdrawal - and receive in my bank account - $1050. Not quite the sixteen grand, but not nothing, either.

If you’re wondering if Square was in the right to close my Cash account, they have this standard bit in their terms of service:

We can terminate or refuse your access to the service at any time, for any reason.

Square may terminate, close, or suspend your Account or use the Service at any time for any reason. Any such termination does not relieve you of any of your obligations to Square under these Cash Terms and any amounts owed to us as provided in these Cash Terms, the General Terms, or any other agreement you have with us. We will not be responsible for any loss, damage, harm or consequences, including any delay or inconvenience you may suffer as a result of our exercise of our rights under this section.

On Tuesday, March 10th, I did go back to Reddit to report what had happened:

Oh - remember how I received an email stating that my email was unlinked? In that email, it said, “If you did not request this change, please let us know.”

So I did “let them know” via their contact support page:

I also received a text message at with the same timestamp stating that my phone number (***-***-****) had been unlinked from my account.

I neither requested nor initiated unlinking either my email or phone number from my account.

I also noticed that my “cashtag” $joehx (https://cash.app/$joehx) no longer exists - or at least the webpage returns a 404.

I would like to confirm that this is the case - my main concern is that my account has been hacked into.

But I received nothing but a canned response on how to recover an old account. I’ve heard nothing since then.

Where Did These Referrals Come From?

I still have no idea.

I do have my referral posted on two referral threads:

Of course, I also have my referral - although it’s via a redirect on this site - on a pinned post on my Reddit user page and on the referral section of this site.

Plus I did a Square Cash Review a while back - back before it got renamed to just Cash.

Before I sign off here, I’m going to provide some updated charts that I initially shared on the Twitter posts mentioned above: 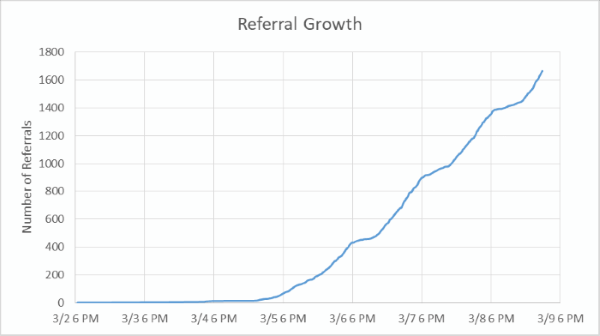 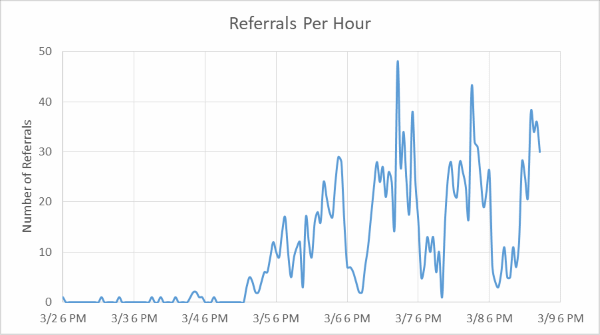 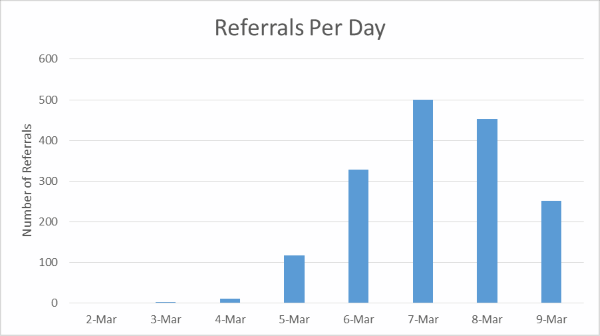 1 comment for Square Closed My Cash App After I Received Over 1,600 Referrals in One Weekend