Supply and Demand Explained With Cashiers and Shoppers

But why? Shouldn’t prices be purely determined by the costs involved? If it costs me five dollars to make a widget, shouldn’t I determine the price to put on the market? Perhaps only increase the price a little - say, to seven dollars?

While the costs of production play a part in determining market prices, ultimately, the law of supply and demand determine the final price.

Let’s see how supply and demand work with an example.

For this example, we’ll imagine a typical retail store where shoppers have to checkout.

Each shopper takes five minutes to checkout. We’ll assume there is no time spent between checkouts.

Speaking of time spent - the unit of money will be time instead of dollars.

We’ll examine five different cases, and then take a deeper look into each case.

With just one checkout for ten shoppers to use, each shopper has to wait for the shopper before them to checkout.

The longest any individual shopper has to wait is 50 minutes. 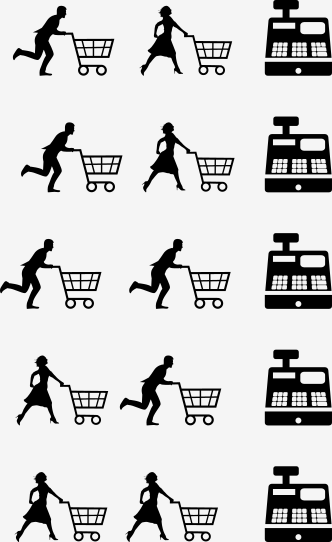 Let’s increase the number of checkouts to five. This means five shoppers can check out in five minutes.

The longest any individual shopper has to wait is ten minutes. 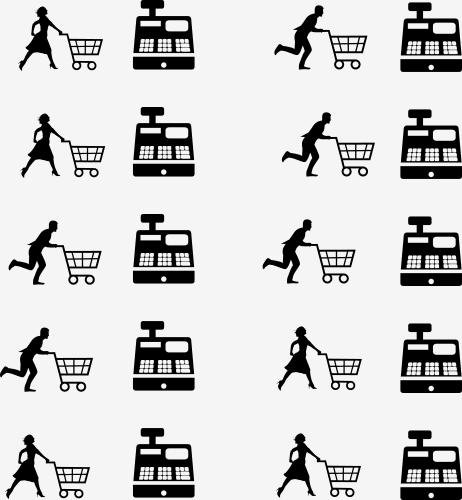 Now we will see what happens with ten checkouts for ten shoppers.

The longest any individual shopper has to wait is five minutes. 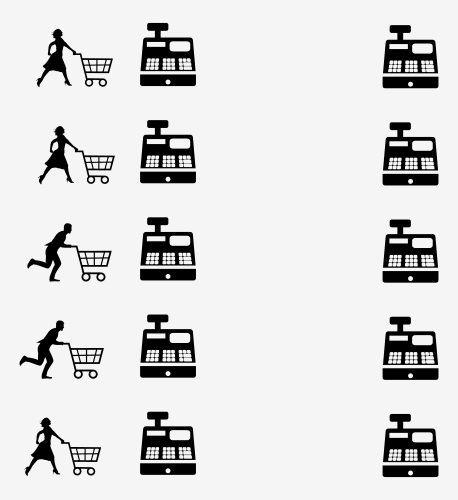 Ok, so what happens if there are fewer shoppers than there are checkouts?

Each shopper still needs to spend a minimum of five minutes checking out - they can’t split their orders among checkouts.

So the longest any individual shopper has to wait is still five minutes. 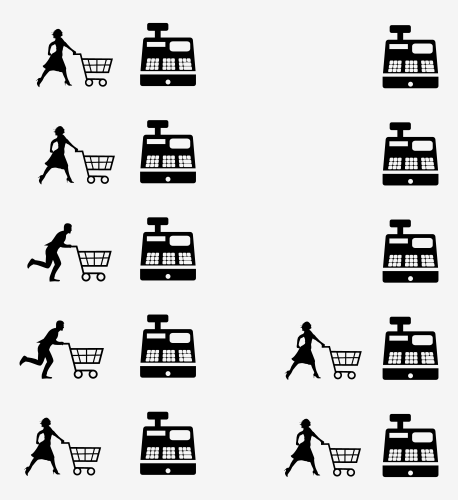 Each of the previous cases (except maybe case 4) involved an even split of shoppers to checkouts.

But what if there is not an even split?

Just like in case 2, the first five shoppers spend five minutes checking out. Once they’re done checking out, the remaining two can checkout.

The longest any individual shopper has to wait is ten minutes.

When this was the case, the most any single shopper had to wait was five minutes.

Intuitively, something feels off about this. My gut - and perhaps yours, too - says that the most efficient cases were when the number of shoppers equaled the number of checkouts.

Finally, with one shopper spending five minutes with one cashier, each spends five minutes, giving a ratio of 5:5, or 1.

Let’s go through each case again.

We can do this quite easily without manually adding everything together - simply add the outside terms together, and you’ll notice that the amounts are equal each time:

Note that there are exactly half as many terms as shoppers. So, we get:

Remember that the cashier spent the entire 50 minutes. Add that 50 minutes to the 275 minutes that the shoppers spent:

There are 11 participants (ten shoppers and on cashier). The average time is thus:

The ratio is as follows:

Therefore, a grand total of 325 minutes was spent with an average of about 29.6 minutes spent. The ratio was 5.5.

Each of the first five shoppers spends five minutes, meaning a grand total of twenty-five minutes spent for that group.

The second set of five shoppers each spends ten minutes, meaning a grand total of fifty minutes spent for that group.

There are fifteen total people (ten shoppers and five cashiers) which gives us an average time of:

A grand total of 125 minutes was spent with an average of about 8.3 minutes spent. The ratio is 1.5.

This case is simple - each shopper and each cashier spends five minutes.

So multiply five by the number of individuals:

Figuring out the average time is just undoing the previous equation:

The ratio is simple as well:

A grand total of 50 minutes was spent with an average of about 5 minutes spent. The ratio is 1.

However, even though some aren’t doing anything, each cashier also spends five minutes.

Together, they spend a grand total of seventy-five minutes.

There are a total of fifteen people, so the average is:

A grand total of 125 minutes was spent with an average of about 8.3 minutes spent. The ratio is 0.5.

The last two shoppers each spend ten minutes (five minutes waiting and five minutes checking out). This means they spend a grand total of twenty minutes.

All the shoppers together thus spend a grand total of forty-five minutes.

Each cashier has to spend a full ten minutes, even the three who are doing nothing while the final two shoppers checkout. This means the five cashiers spend a grand total of fifty minutes.

Add these two groups together:

And then divide by the total number of participants (12):

Finally, the ratio is:

A grand total of 95 minutes was spent with an average of about 7.9 minutes spent. The ratio is 0.9.

The most efficient scenario seemed to be when there was an equal number of shoppers and cashiers.

In reality, the often isn’t an “equal amount” of supply and demand, even in the real world of shoppers and cashiers.

Furthermore, supply and demand affect one another. For instance, an increase in shoppers might cause more cashiers to open their lanes (stop laughing - I said might). Or shoppers might choose to abandon their carts if the wait (cost) is too long, causing demand to lower.

Price affects both supply and demands as well. Shoppers might flock to stores with faster cashiers, for instance. Or leave stores with slow cashiers.

Images include the following vectors from Pixabay:

I will probably make another post about this with charts, graphs, and table, but little other content. Stay tuned!