The Top Seven Podcasts to Start Listening To

I’ve recently started listening to podcasts during my commutes in my car. For those that don’t know, podcasts are a series of downloadable audio shows presented in a similar fashion to radio. The word podcast is a combination (portmanteau) of the words iPod and broadcast. They don’t have to be played on an iPod and can be played on any device - iOS, Apple, Android, burn it to CD], record it on an audiotape, 8-track, vinyl… (Although I doubt anyone has done the last two…)

I used to listen to the local radio stations (I still do, but I used to, too) but the music gets repetitive - especially since most stations have a playlist of ten songs that they swap out only two or three each week. I’d also infrequently listen to talk radio - either NPR or the local Fox affiliate - but the shows I liked often don’t air during my normal drive times, and the Fox affiliate too often aired local sports games when I wanted to listen.

My current phone is a Samsung Galaxy S5 and I drive a 2007 Chevy Cobalt. Neither is that fancy, but they both have aux jacks (also known as headphone jacks, although the Cobalt’s jack is for input, not output), so they pair nicely with a simple aux cable and not with something as complicated as Bluetooth or as ancient as those cassette tape adapters that used to be so popular.

Since I have an Android phone I needed an app on the Play Store. After reading a few blogs and articles, I decided to go with Pocket Casts even though it cost me $3.99. Well, it didn’t really cost me $3.99 since I use Google Opinion Rewards and had more than enough Google Play credit. 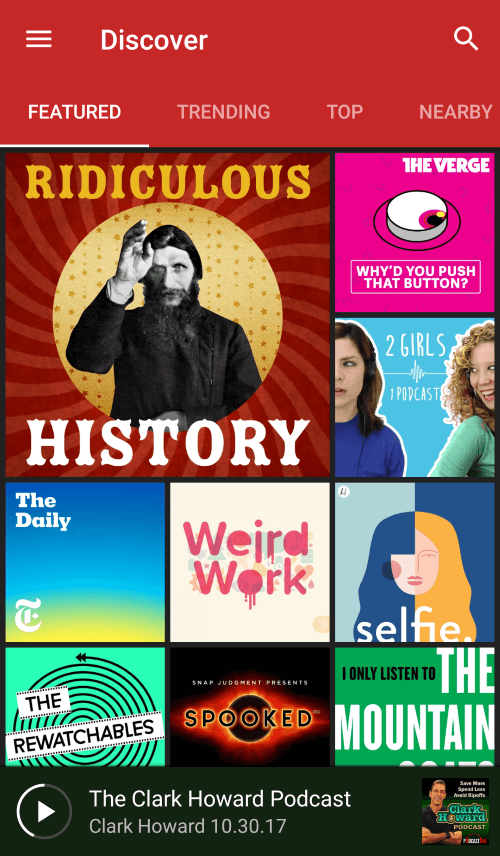 Quality is my biggest concern with listening to podcasts. I don’t want to hear bad information (fake news? is that what it’s called nowadays?). A few of the podcasts I’ve been listening to are syndications of over-the-air shows or put together by NPR. A few of them are more independent, however.

In no particular order, but grouped by topic, the podcasts I’ve been listening to, along with their summary are:

The economy, explained, with stories and surprises. Imagine you could call up a friend and say, “Meet me at the bar and tell me what’s going on with the economy.” Now imagine that’s actually a fun evening. That’s what we’re going for at Planet Money. People seem to like it.

Jonathan & Brad explore the world of Financial Independence. They interview thought leaders in the FIRE community as well as the Passive income community. The podcast and website ChooseFI.com builds a story, taking you from where you are, to where you want to be. They discuss reducing expenses, crushing debt, building passive income streams through online businesses and real estate. They share life hacks and bring on other respected and well-known thought leaders and get them to share their life hacks.

A series about what it’s really like to start a business.

We see lots of movies and TV shows where hackers can infiltrate our lives with just a few keystrokes. But is it real? We’re here to find out. Malicious cat photos, sketchy Wi-Fi networks, rogue rental cars, and all-knowing webcams - those are just a few topics we tackle in our new podcast, Hackable?, where we let our hackers shed light on just how secure we really are.

America’s funniest auto mechanics take calls from weary car owners all over the country and crack wise while they diagnose Dodges and dismiss Diahatsus. You don’t have to know anything about cars to love this one-hour weekly laugh fest.

I also listened to the last episode of Declare! The Official Podcast of the Libertarian Party of Ohio but it’s over a year old. I tried listening to The Nerdist, but it didn’t appeal to me for some reason. Finally, I just subscribed to Ridiculous History, so we’ll see how that goes. 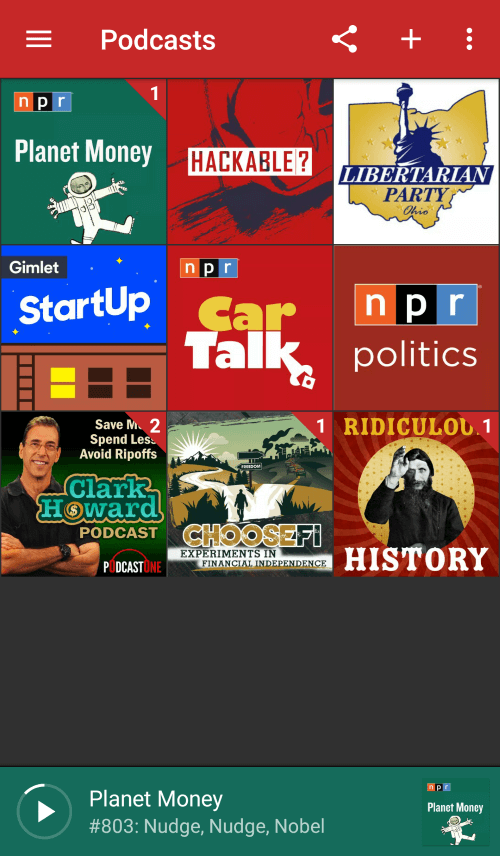 How about you? Do you listen to any podcasts? Any, in particular, I should check out?

2 comments for The Top Seven Podcasts to Start Listening To