Last November, my wife and I joined our local Toastmasters club. Toastmasters, for those who are unfamiliar, is a public-speaking development group. I’m not sure how good a speaker I am, but I know regardless of how good or bad I am, I want to improve. In fact, one of my new year’s resolutions for 2018 is professional a personal development. So Toastmasters just makes sense.

The first speech anyone gives at Toastmasters is called the Icebreaker Speech. Essentially all you have to do is talk about yourself. The goal of this speech is not to necessarily give a good speech, but rather just get up in front of the group and talk.

I gave this speech last week (January 9th if you want a date). So did my wife. My wife’s speech was awesome. Mine was so-so. She had props and didn’t refer to her notes much. I seemed to read directly from a page. 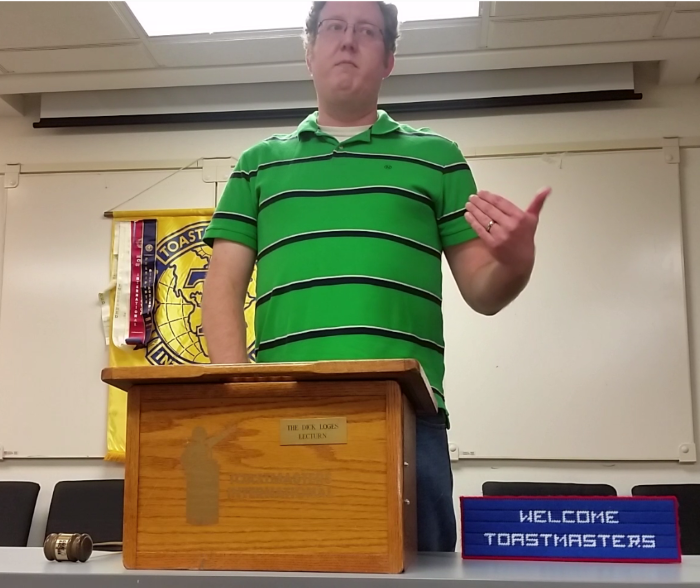 One of the few times I wasn’t looking at my notes.

Sigh. I did record the speech using my Galaxy S5 and a cute little tripod called a Square Jellyfish. Unfortunately, the sound wasn’t that great (it’s a phone), but you could hear what we said. I’m currently looking to see if I can edit or adjust the sound and make the speech more clear.

Oh, and I’m tall, so the camera cut off the top of my head. Since I set up the phone, there wasn’t anyone to fix this!

My speech was pretty autobiographical and chronological, and, frankly, boring. Hopefully, I’ll get better with the next few speeches. That’s the whole point!

Oh, and here’s the speech as I wrote it - but definitely not as I said it:

I was born in Ann Arbor, Michigan, and am the youngest of three boys, which my mom calls her first “batch” of kids. A few weeks after I was born, however, my mom and my dad separated and my mom moved in with her parents in their house just south of Xenia.

Eight years later, my mom remarried and ended up having two more children - her second “batch.” So, at this point, I have two older brothers and a younger brother and sister. I was then a middle child. Eventually, both my older brothers joined the Army and moved out, making me the oldest child in the household. I ended up not joining the military and thus stayed at home much longer than my older brothers did, so I had the unique perspective of being the youngest, middle, and oldest child at different points in my life.

Somewhere shortly after my mom remarried, my grandparents were wanting to downsize their house, so they bought a smaller house in Jamestown while selling their current house to my parents. My parents lived in this house for a couple decades until my step-dad was hired in Louisville, which is where they live to this day. Shortly after my parents moved to Louisville, my grandmother on my mother’s side – the mother she moved in with after separating from my dad – died. I inherited a house from her. Not the house she lived in Jamestown, since my grandfather was still alive, but rather a house she inherited from her mother – my great-grandmother. I moved out of my apartment and into the house, as bittersweet as that was.

It was also at this time I adopted my dog, Princess. She was just a puppy at the time – not much more than eight weeks. I never had much success in my dating life. Perhaps it’s because I took it too seriously - a trait that I think runs in my family. Both my older brothers married their second or third girlfriend, whereas my younger brother is engaged to his first girlfriend. My wife was only my third girlfriend.

Since I grew up just south of Xenia, I went to Xenia public schools my entire K-12 career. I didn’t do many extracurricular activities during that time. I was, however, heavily involved in the local Civil Air Patrol squadron, which is basically an Air Force youth program. I also worked at the local Little Caesar’s Pizza during and a few years after high school.

After graduating high school, I went to Sinclair Community College and began studying industrial engineering. I soon switched my focus to automotive technology. A few months prior to graduating, I quit my job at Little Caesar’s Pizza. Once I graduated with my associate’s, I was hired at Grismer Tire and finally moved out of my childhood home and into an apartment.

I worked at Grismer Tire for three years before I decided to go back to school. I went to Wright State for four years for my Bachelor’s in Computer Science. While working on my bachelor’s, I worked for a short bit at Cousin Vinny’s Pizza, and then as a teacher’s assistant for a Java lab at Wright State, and as a programmer at AFIT, the Air Force Institute of Technology.

After I graduated from Wright State with my bachelor’s, I worked for a few months as a software quality assurance engineer at a company called Moreover. After working there, I was hired at my current employer Northrop Grumman as a software developer.

So far, I’ve talked about everything up to the present. But what is in store for my future? I am about to graduate from Wright State this year with my Master’s in Computer Science. I also have an opportunity at my work to get a significant raise in the next month or so.

These are both very good things at this time in my life - less time at school and more money - because with some of the biggest changes that have happened to me in the past few years are resulting in an even bigger change coming in April.

My wife whom I’ve fallen in love with over the past four years, is pregnant with our first child.

My entire life has led me up to this point. Growing up I had a few different perspectives that not many people, if any have. I’ve had a strange array of jobs, from pizza, to automotive, to software development. Finally, I have an exciting future both at work and with my lovely wife.

That’s enough about me.

3 comments for Toastmasters Icebreaker Speech: The Story of Joe