We Bought A Van

Recently we went out and bought a new vehicle: a 2014 Honda Odyssey minivan. I’ll get into the details in a bit, but essentially we’ve been looking for a while and just happened to come across the right one.

The reason we bought a van is twofold: my wife’s car was reaching the end of its life, and we needed a bigger vehicle for our growing family.

Before the van, my wife drove a 2004 Honda Civic. There were about 150,000 miles on the vehicle - and to some, that’s just the beginning of a Civic’s life, but this vehicle had a few problems. It leaked engine oil like crazy - and probably transmission fluid, too. Both the engine and transmission were always covered in oil no matter how often I cleaned them (good like finding that oil leak!) Cylinder 2 was starting to misfire intermittently - it would occasionally have a jerk to it and throw a P0302 Honda Cylinder Number 2 Misfire Detected code. This was probably just an ignition coil, but the intermittent nature would make it hard to verify the repair.

If you haven’t caught the gist of the previous paragraph, I typically do my own work on my vehicles. In fact, I was able to document a couple things I did to her Civic on my posts 2004 Honda Civic Cabin Air Filter Replacement and Unlocking a 2004 Honda Civic Radio and Setting the Clock.

Ordinarily, I would just fix the vehicle rather than buy a new one (except maybe for that massive oil leak), but we needed a new vehicle for other reasons. We only have one child right now, but we do want more (at least one more, I think we’re on the fence about have more than two at this point). We needed something bigger than a Civic or my Chevy Cobalt.

Oh, and an added bonus is that a van is better for hauling stuff than a sedan. We’ve already used it when we bought a shower base for the bathroom remodel I’ve been working on.

I’ve actually been keeping my eye out for a van for a while. While I’m more of a Chevy / GM person, my wife comes from a “Honda Family” that tends to prefer Hondas, so I was shopping for either a Honda van or a Honda SUV. For those that don’t know or anyone who wants a recap, the only Honda Minivan makes currently is the Honda Odyssey, and the Honda SUVs are the Honda CR-V, the Honda HR-V, and the Honda Pilot.

Over the course of the last several months, I would occasionally do a search online - I never talked to any dealers. I would search sites such as Carvana and CarMax, typically setting the search filters to the last four years (so, from years 2014 to 2018). This means, of course, that I was looking for a used vehicle. I would also select the makes (and sometimes models) I was interested in - Honda mainly, but also Toyota, Ford, and GM makes. I was interested in any luxury brands, although I didn’t completely rule out an Acura or Lexus if I could find it for the right price (since those are Honda and Toyota’s luxury brands and are pretty much the same vehicles).

I also searched some aggregate sites. These sites let you search all the local dealerships. I’m pretty sure they just search the “big” name-brand dealerships, like So-And-So Honda or Mr. Big Guy Ford. I gave the same search parameters I did for Carvana and CarMax - years 2014 through 2018, Honda, GM, or Ford, and SUV or van.

One thing I noticed from searching is that only two things matter when dealers price a certain vehicle - age and mileage. Oddly enough, condition and history do not affect how dealers price vehicles. Seriously - vehicles that had accidents were priced the same as vehicles that were not.

What I was looking for, then, was a few-years-old vehicle with higher mileage that was in excellent condition.

The average amount of miles people drive is 12,000 miles per year (think of the old recommendation of changing your oil every three months or 3,000 miles - that’s because those two measures are almost the same thing). A four-year-old vehicle, therefore, might have 48,000 miles. Of course, some vehicles might average more and some vehicle might average less.

It turns out that the vehicle we ended up buying - 2014 Honda Odyssey - typically has around 60,000 miles on it. It seems minivans are more driven than other vehicles. The Honda Odyssey we bought had over 90,000 miles.

Most dealer’s sites provide free CarFax access to any vehicle they sell and the Odyssey was no exception. It showed one owner, no accidents, and regular maintenance. As you might expect, CarFax won’t show things that aren’t reported, which is most likely accidents, so you always have to take a CarFax with a grain of salt.

The only odd thing I noticed in the CarFax is that it was sold brand new with around 170 miles - I’d expect less than 20 on a brand new car. But this was only odd, not alarming.

My wife agreed to check out the minivan on a Sunday after church. We dropped our son off at his grandparents and headed down to the dealership with the vehicle.

At the dealership, we were greeted by an older gentleman soon after we stepped out of our current car. I told him I was interested in a vehicle he saw online, and he began to talk up how many online sales they make.

While we were waiting for him to get the keys to the Odyssey, I popped the hood for a quick glance and to check the fluids. This seemed to annoy the salesman, although he expressed this with a bit of humor pointing out that “you can’t drive from underneath the hood!” I also checked the suspension by pushing down on the front end and seeing how many times it bounced. It didn’t bounce at all - it just returned to its normal resting position.

During the test drive, I listened for any pops or other noises while turning or going over any bumps. I didn’t hear anything, but we really didn’t go over any bumps either. There was some small vibration at the front end, but I had looked at the tires and noticed that the front tires were well worn. 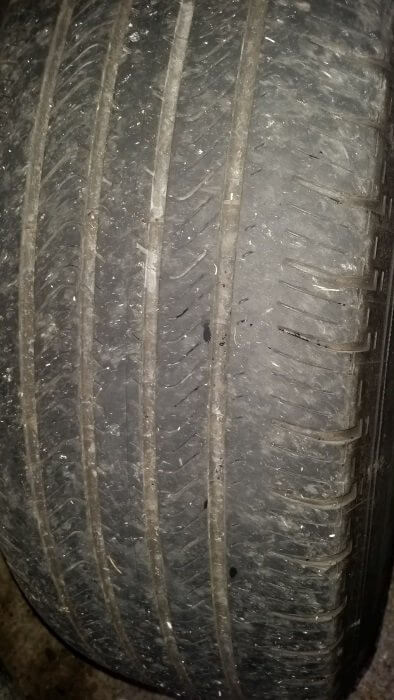 One of the front tires. 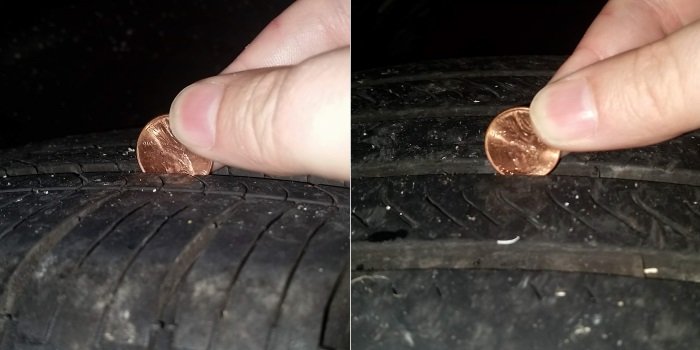 I also looked underneath the car. Even though the CarFax said the minivan had lived its entire life in the area, I saw little or no evidence of rust. The rims had enough space that I could peak at the brakes - there was plenty of pad left.

Basically, the only things I noticed wrong with the car were the front tires and the small vibration, but I figure the vibration was probably the tires. My wife didn’t even notice the vibration - that’s how small it was. Oh, and the tire pressure light was on.

We also test drove a Honda CR-V and looked at a few Pilots. However, the CR-V, which is normally priced lower than Odysseys, was actually priced about $1,000 more than the Odyssey. This is because the CR-V had low mileage (probably average mileage) compared to the Odyssey. All of the Pilots were priced way higher than either the Odyssey or the CR-Vs.

The price seemed reasonable, so we decided to buy it. I suck at negotiating, so I wasn’t able to get the price down any. I pointed out that it needed new front tires. I went out to look at them with the salesman and he tried to tell me that the tires were fine. I told him that they while weren’t bald but they still needed to be replaced.

I then pointed out that it would be due for a timing belt soon. Honda recommends changing the timing belts on 2014 Odysseys at 105,000 miles, which is about a year away.

I didn’t get him to knock the price down or provide new tires - as I said, I am no good at negotiating. Maybe if my wife and I were more willing to walk he may have done something for us. That said, he did “go talk to his manager” and wrote down on something called a “due bill” that the dealer would replace the tires if needed within 30 days, and that when it’s time for the timing belt, the dealership would do it at cost.

I don’t know if the so-called due-bill is worth the paper it’s written on. The sales contract we signed did mention a due bill (the contract more mentioned that promises made only orally were not binding, and then mentioned something about a due bill). We’re currently trying to contact the service department at the dealership, but so far it’s been a pain. They don’t answer their phone - it goes to voicemail.

We’ve already put the Odyssey on our insurance. Full coverage since we did finance part of the purchase. I actually intend to keep full coverage on it after we pay it off mainly because full coverage is not that much more, and we can’t easily replace the van (as evidenced by the fact we financed it.)

We’ve also already sold my wife’s old car. We sold it to CarMax for a decent price. Not great, but decent. We probably could have sold it for more via private party, but we didn’t want to deal with anyone coming back complaining about the misfire (or any other problem) or with the hassle of haggling.

Oh, and here’s the van in all it’s glory: 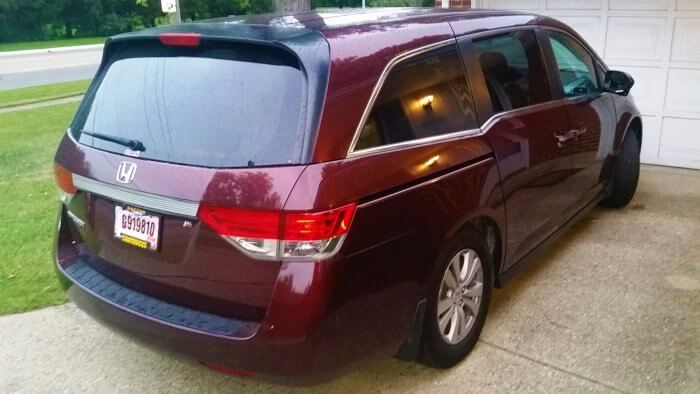