First, let’s get through the numbers for the month of December.

I only have “total” statistics for Google Analytics and Adsense.

It wouldn’t make sense to have a “total” for Alexa, since that is more of an instantaneous statistic (sort of like how you can’t ask what is the total mph you drove during a trip). There is an average, but I don’t think that makes much sense either (although the non-weighted average of my global rank is 1,087,929 if you are curious).

As for the Google Search Console stats, I only started correctly using it since August and first reported the numbers in my September report. Maybe next year I’ll have more numbers and I’ll be able to report. 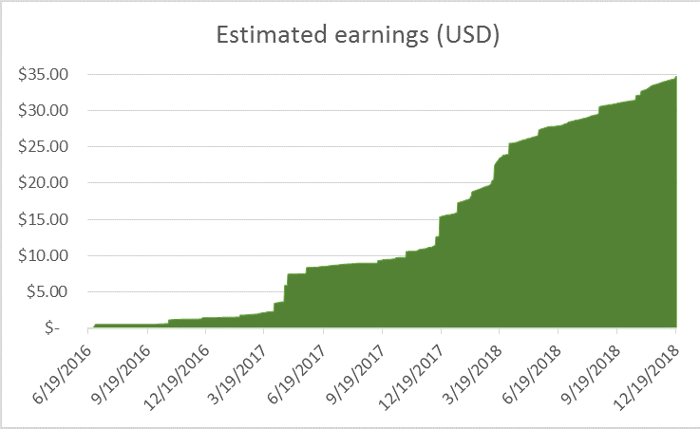 The above graph is my cumulative earnings on AdSense since the day before I earned my first penny - which was on June 20, 2016. My AdSense reports that Google gives me goes back to March 30, 2016 (maybe that’s when I added it to this website?), but I earned nothing between that date and March 30, 2016.

I find it interesting that I earned pretty much nothing in that first year. There’s a small jump slightly after March 2017, but then it plateaus until the end of 2017. After that, my earnings seem to grow rather consistently.

I made a similar graph for my July 2018 report.

Here’s where I think things will get interesting - how do different stats correlate with one another?

I created the above table in Excel. The horizontal categories are identical - and in the same order - as the verticle ones. This allows for a few sanity checks to see if I got the calculations correct (even though I just used Excel’s correlation function CORREL). First, the diagonal axis should consist of only ones - that is, something is 100% correlated to itself. Second, the table should mirror itself along the diagonal axis. This is because the correlation of A to B is the same as the correlation of B to A.

I also put bold lines around similar properties, forming four groups: posts (which only has itself), Alexa, Google Analytics, and AdSense. Finally, I used Excel’s conditional formatting to give a yellow color if the number is close to zero, and dark green if the number is close to one or negative one. The colors for numbers between 0 and 1 (or 0 and -1) are interpolated between yellow and dark green.

The first interesting thing I noticed is that the numbers are highly correlated with other numbers in the same property. This makes sense; if you have more unique users (or visitors) to your website, you’d naturally expect to have more sessions and page views. Similarly, you’d expect that the more ads served (impressions) or the more ads clicked, the higher the revenue.

However, it seems that the Alexa properties are not highly correlated with either of the Google properties. You’d expect that the more visitors to your site, the lower your Alexa rating. There are two reasons I think that the correlation is low between these properties. The first is that Alexa is an Amazon product, whereas Analytics and AdSense are Google products, meaning that the data source is not the same. The second is that Alexa is a ranking system, so the score is not just dependant on how many people visit your site, but also how many people visit every other website. So if the website traffic doubles for every website, the Alexa ranking would theoretically not change.

That’s it for 2018. I hope everyone has a wonderful holiday, be it Christmas or whatever you celebrate, and a wonderful New Year. I still may make some posts this year, but will report on that in January 2019’s blog statistic report.